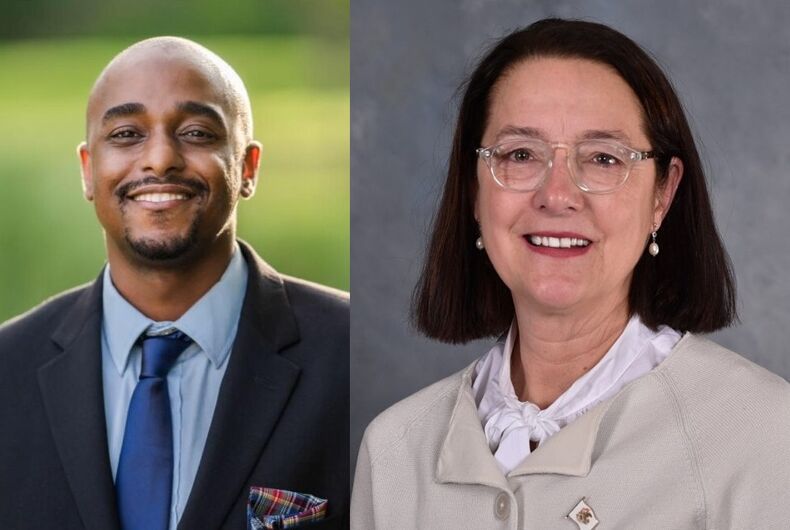 A Republican lawmaker in Illinois is apologizing for racist and homophobic comments she was caught making at a fundraiser against her Democratic opponent.

State Rep. Amy Grant represents the state’s 42nd state house district, which is in DuPage County, located right next to Chicago. She was caught making fun of her opponent – Democrat Ken Mejia-Beal, who is Black and gay – saying that he will be “another person in the Black Caucus” and “because of the way he talks,” which is “all LGBTQ.”

Related: The Democrats are going to have a huge field of LGBT candidates nationwide this election

State Democrats released parts of a fundraising call that Grant participated in. During the call, she said that Mejia-Beal is “afraid to come into the district, actually, into the heart of the district anyhow.”

A caller asked her what she meant, and she said it’s “not because he’s Black.” Instead, she said using a sing-songy voice, it’s “because of the way he talks; he’s all LGBTQ.”

“He wants to work for the chronically ill,” she said. “He just gives us, like, crazy.”

“That’s all you’re gonna vote for is Cook County, another, ya know, Black Caucus, that’s all we need is another person in the Black Caucus,” she said.

She went on to say that state Rep. Will Davis (D), who is Black, is “a buddy of mine… and I am a friend of his and he respects me.”

So it’s OK because she has a Black friend.

Grant’s campaign said immediately after the recording was made public that she “did not give permission to be recorded,” even though the fundraising call opened with a statement telling everyone that they were being recorded.

She later apologized in a statement.

“I deeply regret the comments I made about Ken Mejia-Beal and reached out to apologize to him this morning,” she said. “These comments do not reflect my heart or my faith.”

Mejia-Beal responded with a statement that opened with “I am a DuPage County resident,” a response to Grant’s insinuation that he couldn’t possibly represent the very white DuPage County because he’s Black.

“In her hurtful, degrading, and wholly unacceptable comments which have now come to light, Representative Grant makes it clear that she sees only the color of my skin and my sexual orientation,” he said. “And that in her mind disqualifies me as a leader and even disqualifies me as a member of our community.”

Grant took office in 2018 when she won the general election against her Democratic opponent with a thin 52% to 48% margin.