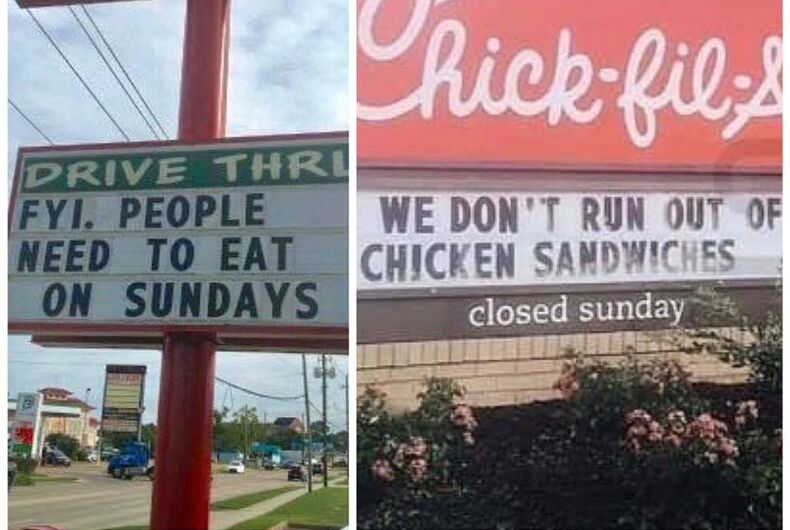 The Great Chicken War of 2019 is off to a (non)flying startPhoto: Composite

The fast food chicken chains Chick-fil-A and Popeye’s have a longstanding beef over which one has the best chicken sandwich. Popeye’s salty Twitter account regularly trolls Chick-fil-A – and the chain’s policy of closing all locations on Sundays is a regular target.

While employees and franchise owners may not be Christians at all, the chain’s founders have always insisted on “honoring the Sabbath.” They also have a history of donating millions of dollars to anti-LGBTQ organizations.

Popeye’s has hit Chick-fil-A frequently over being closed on Sundays, arguing that it’s bad for customers who get hungry seven days a week. Over the weekend, the chain tweeted a simple jab at Chick-fil-A to bring the overtly religious policy back to customers’ attention.

“It’s the ‘closed on Sundays’ for me,” the chain tweeted.

It’s the "closed on Sundays" for me

Back in 2019, Popeye’s launched a new chicken sandwich that was deemed tastier than Chick-fil-A’s iconic menu mainstay, kicking off the #ChickenSandwichWars. When Chick-fil-A tweeted a rallying cry for their sandwich, Popeye’s quick witted reply took the internet by storm.

Popeye’s offering proved so popular after the guerrilla Twitter campaign, the chain ran out and had to spend months restocking supplies to keep them on the menu.

At one point, one Chick-fil-A location’s marquee announced, “We don’t run out of chicken sandwiches.” One Popeyes restaurant shot back, “FYI, people need to eat on Sundays.”

Since then, Popeye’s has capitalized off of Chick-fil-A’s name recognition, continuing the fast food feud and garnering free PR the entire time.