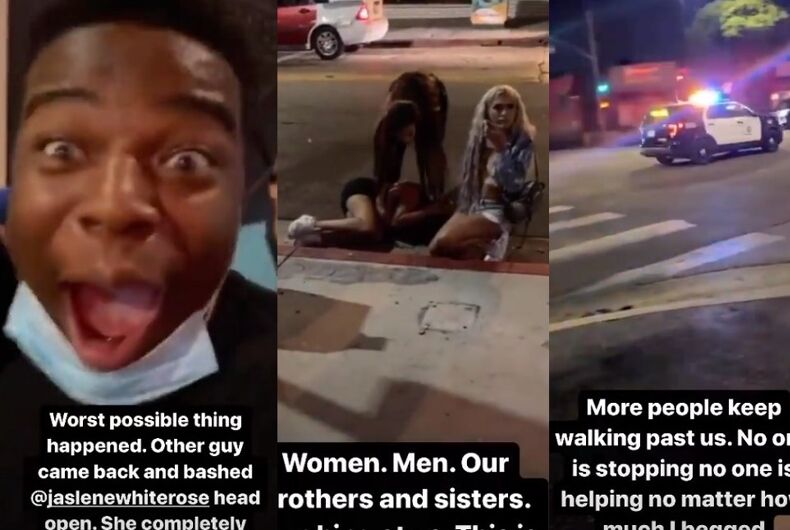 Eden the Doll, Joslyn Flawless, and Jaslene White Rose were robbed, beaten, and chased through the streets.Photo: Screenshots

Video went viral of a brutal attack on transgender Instagram influencer Eden the Doll and her friends Joslyn Flawless and Jaslene White Rose last month, and now prosecutors have filed hate crimes charges against two men in connection to the attack.

Carlton Callaway, 29, and Davion Williams, 22, face charges including robbery, assault, and grand theft for allegedly attacking and robbing the three women and filming themselves laughing about it, while police officers and other passersby did nothing to help the victims. Each man is also facing hate crime enhancements because of the suspected anti-transgender nature of the crime.

“This was the most traumatic thing that ever happened to me,” Jaslene posted on Instagram with photos of the attackers. “Not just the fact that I was hit by a grown man, but because there were so many men watching this happen to me and my friends. And we begged for someone to call the police, but they were too busy recording and laughing.”

One of the men “recorded and posted the entire thing” to Instagram, Eden posted along with screenshots of the attack. “HE MOCKED US, sexualized, and instigated THE ENTIRE attack. Him and his friends stole from us. Beat us. Laughed at us. Humiliated us. AND had the nerve to POST IT.”

The trouble started as the women were waiting for an Uber and one of the men stole Eden’s phone. The group started throwing objects at the women as they tried to retrieve the phone and mocked them. The video shows that the attack only intensified after the women originally resisted.

Another man “held a crowbar to my face and threatened to kill me unless I stripped my shoes off and gave him my jewelry and my processions [sic],” Joslyn posted on Instagram.

Callaway, one of the two men currently facing charges, was arrested in August but released as the case was recommended for further investigation, which drew outrage from trans and queer activists in the area.

The district attorney “must be held accountable to provide the basis on which this decision was made in light of the victims’ accounts and bystander videos of the incident,” said Terra Russell-Slavin of the Los Angeles LGBT Center in a statement about Callaway’s release several weeks ago.

Michael Curls, the attorney for Callaway, told the LA Times that he is “disappointed” with the district attorney for filing hate crimes charges because, Curls claims, his client didn’t make anti-transgender comments during the attack.

Curls also said that Callaway and Williams didn’t know each other.

A third man was arrested in connection to the attack but prosecutors declined to press charges, saying that he did not use “force or fear” against the victims.

Dictionary.com just added a lot of LGBTQ words but will use “homosexuality” less