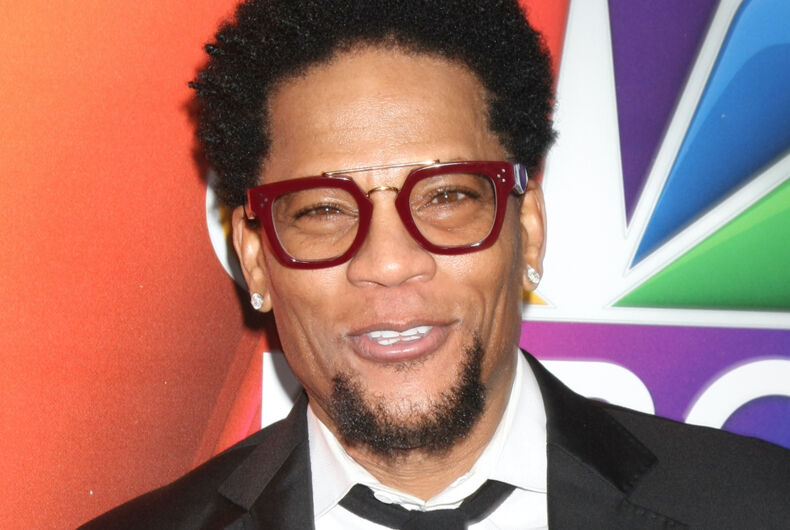 Comedian DL Hughley has a history of making ignorant comments about LGBTQ people.

After Democratic politician Andrew Gillum came out as bisexual a few months after a sordid sex scandal, Hughley did the expected. He punched down.

“So when #ANDREWGILLUM came out as bi-sexual [sic] yesterday! Is that considered halfway outa the closest? [sic],” he tweeted with the hashtag #TeamDL, a vanity tag that Hughley uses to increase social engagement.

So when #ANDREWGILLUM came out as bi-sexual yesterday! Is that considered halfway outa the closest? #TeamDl

Gillum is the former mayor of Tallahassee, Florida and was seen as a progressive due to his support for expanding Medicaid, removing Confederate statues, ending ICE, and increasing corporate taxes and the minimum wage.

Earlier this year, Gillum was found inebriated and vomiting in a Miami Beach hotel room with two other men and what officers believed was crystal meth. One of the other men – who was identified in the media as a sex worker – overdosed in the hotel room.

Gillum, who has three kids with his wife R. Jai Gillum, came out officially in an interview with Tamron Hall, saying “I don’t identify as gay but I do identify as bisexual. And that is something that I’ve never shared publicly before.”

The Gillums said that Andrew had been honest with his wife about his sexuality and that she knew he is bisexual before they were married.

“So many people just don’t understand bisexuality,” R. Jai said in the interview with Hall. “Bisexuality is just something different. I just believe that love and sexuality exist on a spectrum.”

After backlash from social media users, Hughley continued to try to defend his “joke.” He has previously made fun of actor Terry Crews when he spoke out about being sexually assaulted by another man and defended comedian Kevin Hart’s old homophobic tweets. Hart stepped down from hosting the Academy Awards after national outrage over the violently anti-LGBTQ “jokes,” he had sent and half-heartedly apologizing before claiming victimhood in an interview with Ellen DeGeneres.

Yep after he was busted passed out naked in a hotel with a male escort and crystal meth! But besides that you’re right!

Hughley’s history of being completely and unapologetically wrong about LGBTQ issues goes back to 2010 when he appeared on The View and discussed the rate of HIV infection in the Black community with then host Sherri Sheppard. They blamed men on the “down low” (men who have sex with other men outside of their primary heterosexual relationship).

After HIV activists pointed out that the statement was simply false – the highest rate of infection was coming from men who had multiple partners (both same and opposite sex) – neither Sheppard or Hughley would admit they were factually wrong. GLAAD ran a full-page ad in Variety magazine calling on the show to step in and correct the record.

We got more important things ro worry about. Use your blue check to get people registered to vote. People have to stop being distracted by nonsense. Rather he gay or bisexual is not gone change who is the sheriff, mayor, city council, city manager senator, $ or president .🦅

An Uber driver heard his passenger was gay, so he beat the snot out of him