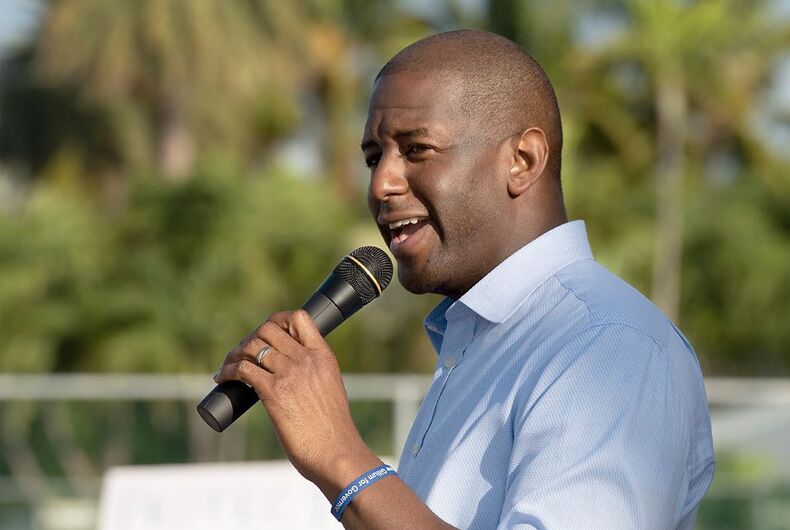 Andrew Gillum, the former mayor of Tallahassee and Democratic candidate for Governor of Florida, is named at the center of a police report circulating online. The report names him as an involved party to a crystal meth overdose in a Miami Beach hotel on early Friday morning – and the man who had the overdose is allegedly a gay escort.

While rumors have circulated about Gillum’s sexuality before, speculation is ramping up after the alleged escort could not explain how Gillum was present.

Related: Chelsea Manning has been released from prison following a suicide attempt

The leaked documents show that police were called at 1 AM to handle a distress call at the Mondrian South Beach Hotel. Aldo Mejias, 56, is listed as the complainant. He was the cardholder that rented the hotel room that Travis Dyson, 30, and Gillum were in.

The report alleges that when Mejias arrived at 11 PM, Dyson and Gillum were already ‘intoxicated’ in the room, and Dyson had trouble breathing – he collapsed soon after.  Mejias tried to awake Dyson, at which time he began to vomit and collapsed again.

At that time, Mejias began “performing chest compressions and called medical assistance” while Gillum was also vomiting. When police arrived, they confiscated “three small baggies of suspected narcotics…in plain sight” on the hotel room floor, and found that Gillum was “too inebriated” to talk with them.

Dyson, suffering from cardiac arrest, was transported to a local hospital. He was treated and eventually released.

The incident is not being treated as a criminal matter, and Gillum was allowed to return home. Mejias was also taken to the hospital as a precaution.

In a statement, Gillum denied to have any knowledge of, or involvement with, crystal meth.

“I was in Miami last night for a wedding celebration when first responders were called to assist one of my friends,” Gillum’s statement read. “While I had too much to drink, I want to be clear that I have never used methamphetamines.”

“I apologize to the people of Florida for the distraction this has caused our movement,” he also said. “I’m thankful to the incredible Miami Beach EMS team for their efforts. I will spend the next few weeks with my family and appreciate privacy during this time.”

Later, a Miami New Times reporter contacted Dyson, who claimed to have no knowledge of the wedding and only know Gillum for a year. “I personally was not celebrating a wedding. I don’t know if [Gillum] was in town for a wedding…he did not mention that,” Dyson said. Eventually, he stopped talking to the reporter and eventually began to ignore all further attempts at contact.

Subsequent investigation of Dyson found that he “maintains a profile on” Rent Men, a “website for male escorts,” under the name Brodie Scott. “I’m not quiet. I speak my mind. If I want something I’ll work to get it,” he told the website in 2018. His profile, which also described him as a military veteran, has subsequently disappeared.

Dyson’s Instagram account, with over 27,000 followers, described him as “still young…sometimes professional” and “very taken” before also disappearing.

Here is the last page of the report which sites the crystal meth.

In 2018, Gillum was the first Black Gubernatorial candidate from a major party in Florida’s history. He served as the mayor of Tallahassee, the state’s capital, from 2014 to 2018. His campaign was dogged with racist attacks, including robocalls “crudely imitating African Americans.”

After losing to Ron DeSantis by less than 40,000 votes, Gillum founded the voter registration organization Forward Florida. He has been married to R. Jai Gillum since 2009, and they have 3 children. He is also a CNN contributor.

Social media is the new opium of the people

Everything is closing due to the coronavirus pandemic – except this organization