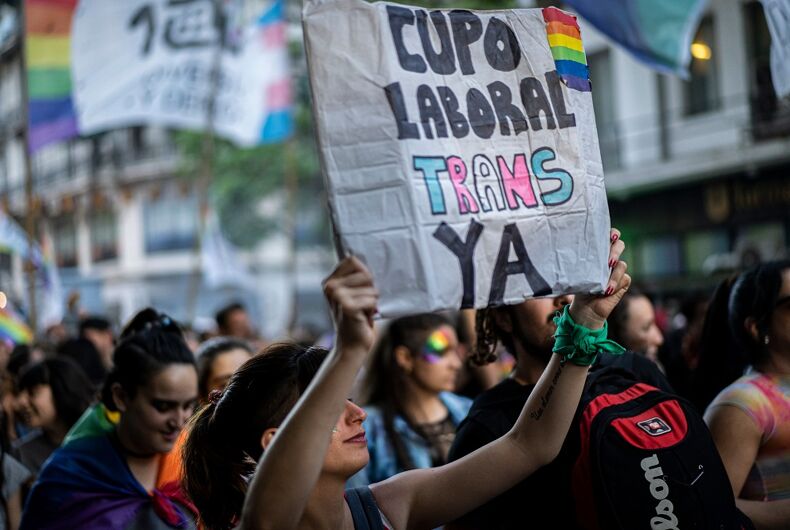 A sign in favor of a trans work quota at Buenos Aires Pride in 2019 Photo: Shutterstock

Argentina’s president is now requiring 1% of public sector jobs be set aside for transgender people.

President Alberto Fernández signed a decree on Friday, September 4 that creates a job quota for transgender people in order to better protect against unemployment, according to Página 12.

“Every transvestite, transsexual, and transgender person has a right to decent and productive work,” the decree says, “in equitable and satisfactory working conditions and with protections against unemployment, without discrimination based on gender identity or expression.”

Transgender people do not have to have corrected the gender marker on their ID to qualify for one of the jobs and allows for jobs to be reserved for transgender people if they are still completing their education.

The decree also creates a national registry for transgender government workers with the Ministry of Women, Gender, and Diversity, which it says is entirely voluntary. The Ministry is in charge of tracking how many government positions are held by transgender people.

A 2012 law in Argentina allows transgender people to correct the gender and name on their official documents without the approval of a doctor.

The quota decree is similar to part of 2018’s Comprehensive Law for Trans Persons in Uruguay, which, among other things, set aside 1% of government jobs for transgender people, as well as 1% of educational scholarships.

Which small business owner did the most to give back to the community?