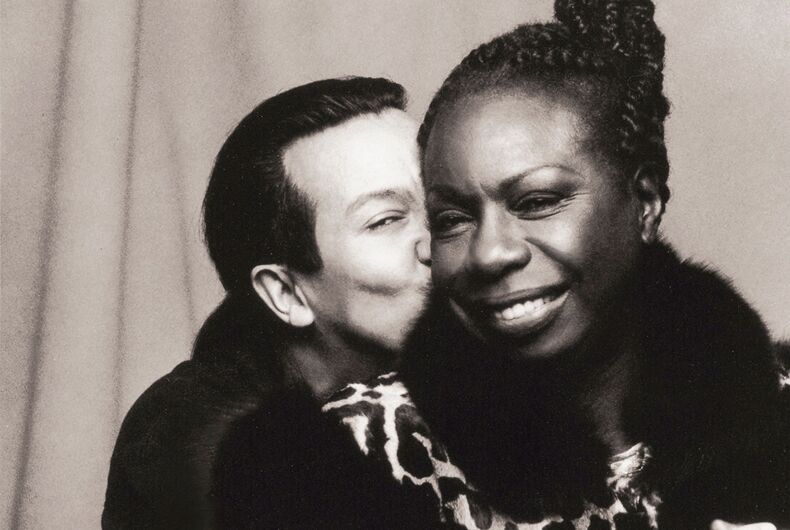 Nina Simone is my favorite artist in all the world. She was a tough cookie to work with and by the time I met her she had already recorded for many record labels and was known for being a difficult diva. It was a gift working with her.

She spoke about the beauty and the troubles of life with that world-weary voice that enchanted everyone who heard her sing. The record I executive-produced for her is called A Single Woman.

Related: This out bisexual singer reigned as Empress of the Blues in the 1920’s

It is a record that speaks of love loneliness and loss. It was modeled after Frank Sinatra’s record A Man Alone [and Billie Holiday’s Lady in Satin], which we both loved.

I thought she was so beautiful and when she smiled all was right with the world… but don’t get on her bad side cause she had quite a temper and you never knew if she was packing a pistol in her purse.

The last time I saw Nina was in July of 1999. She was doing a concert in London. She was part of the Meltdown Festival music series at the Royal Festival Hall, being promoted by Nick Cave from the band The Bad Seeds. Artists from all genres — including Alan Vega, Elvis Costello, Lee Hazel-wood, and, of course, Nina Simon — were appearing.

“Now 66, Simone is a bulky, forbidding figure who seizes complete control of the stage despite the fact that she can walk only with difficulty,” The Guardian said at the time. “As she launched into ‘Black is the Colour,’ you didn’t need to be a professor of musicology to work out that her voice is barely a husk of its former self, shorn of such luxuries as pitch and intonation.”

“What her performance has, though, is an uncompromising rawness, and an implicit attitude that says, “If you don’t like it, **** you.'”

On the afternoon of her show, I showed up at the Ritz in Piccadilly where she was staying. I arrived with two dozen white roses and a bottle of champagne because I knew she would love both of them. I hadn’t seen her in a while and we were both thrilled to see each other.

There was a lot of activity in her room. A few people were making sure her clothes were pressed; another woman was cornrowing her hair, braiding it close to her scalp so she could wear a turban for that evening’s performance. But once she saw me, she kicked everyone out of the room and threw open her arms. We hugged, we kissed, and then she said to me, “Oh, my dear, we should take a bubble bath!”

“What?” I asked, a little shocked. But then I thought to myself, “Well, it is Nina Simone — we’re going to take a bubble bath.”

I went into the bathroom and checked the medicine cabinet, but of course — no bubbles. I called the concierge and asked them to call the chemist and see if they have any bubble bath products and, if so, would they purchase it, put it on the bill, and bring it up to Nina Simone’s room.

After the porter brought the bottle to us, I poured it into the tub and waited for the bubbles to rise up. Nina came in and without a thought took off all her clothes and climbed into the bathtub. I wasn’t too hot about taking off all my clothes, so I kept my boxers on and got in with her.

I had brought the champagne with me and poured out two glasses. We started drinking and laughing and telling each other completely silly stories. We felt totally free, without a care in the world.

Eventually, the bubbles disappeared, and we climbed out of the tub. Her assistants and hairstylist returned to dress her and finish her hair.

I gave her a big kiss and left. I returned to the hotel at 6 p.m. to take her to the show at the Royal Festival Hall. She rose to the occasion that night. Her performance was unspeakably remarkable.

Michael Alago​ is the quintessential New Yorker with an “only in New York” story, driven by creativity, instinct, and guts. Passionate about music, art, and literature, the much-beloved music executive and published photographer is known for his extraordinary work with ​Metallica​, ​White Zombie​, ​John Lydon​, ​the Misfits, Cyndi Lauper​ and ​Nina Simone​.

In his recently published autobiography, “I Am Michael Alago: Breathing Music, Signing Metallica, Beating Death,” Alago recounts his fearless entry into the punk rock scene as a gay Puerto Rican teen from Brooklyn, the intense music biz career that followed, surviving AIDS in the 90s, his recovery from drug and alcohol addiction, and photographing some of the hottest roughnecks on the planet.