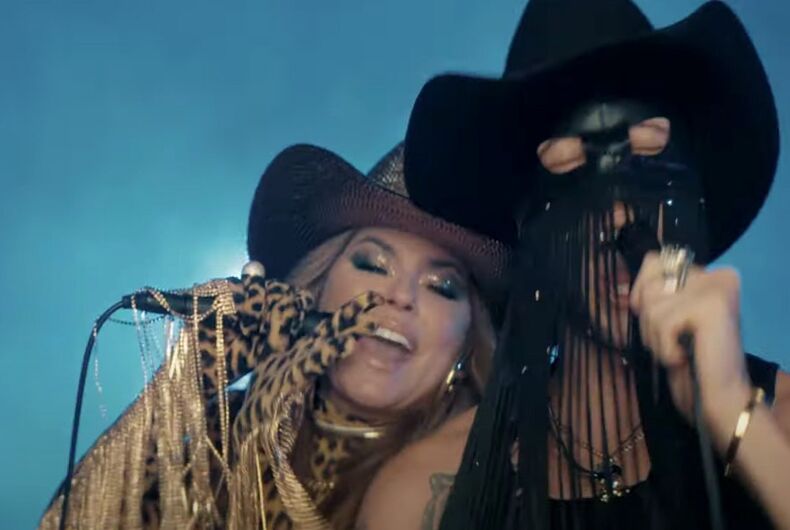 Gay cowboy crooner Orville Peck has teamed up with the “Queen of Country Pop,” Shania Twain, to make a very LGBTQ-friendly country music video, with filmmaker and gay icon John Waters in a key supporting role.

“Legends Never Die” features appearances by several more characters who may be familiar to an LGBTQ audience, including Jaida Essence Hall, the winner of RuPaul’s Drag Race Season 12; Miss Toto Clermont, a drag performer and bodybuilder from Chicago; Rebecca Brosnan, an actress and fashion influencer; and model Zachariah Shaw.

Related: Queer artists won big at the Grammy Awards & stole the show on the red carpet

“Legends Never Die” is one of six songs on Peck’s new EP, Show Pony, now playing on streaming platforms. Show Pony is a follow-up to Pony, an album released in 2019 on the Sub Pop label. This is Peck’s first release with a major label.

Waters sets up the performance by Twain and Peck with a “special vocal appearance” in which he plays a radio DJ with a southern drawl (and a touch of a Baltimore accent). Waters is never seen in the video, but his Balmorese is hard to miss.

“Is it hot enough for you yet? Well stick around ‘cause tonight’s gonna be hotter than a firecracker on the Fourth of Julahh,” he promises, from a car radio. “How ‘bout that Orville, by the way? That boy’s got talent with a capital T. I wonder what that ol’ boy’s doin’ tonight to beat the heat…”

Part of a new breed of queer singers, Peck has been likened to Roy Orbison and a very early Elvis Presley, but with the sensibility and awareness of k. d. lang. A show pony himself, he’s developed a loyal following among “cowfolx,” a term for queer country folks. One of his lines in “Legends Never Die” is a nod to that audience: “You got nothin’ if you ain’t Pride.”

Based in Canada like lang and Twain, Peck has never performed or given interviews without a face mask, even before the pandemic. He wore a gold-fringed veil in his appearance with Twain this week on The Tonight Show Starring Jimmy Fallon.

Another song on Show Pony is his haunting take on “Fancy,” a 1969 ballad first sung by Bobbie Gentry, and later covered by Reba McIntire and others, about a child named Fancy whose mother needs money and dresses her child up in a satin dancing dress, to be a prostitute.

It takes on a new, gender-bending meaning with Peck as the singer. Esquire called “Fancy” “the subversive country anthem of the summer.” The New Yorker has called Peck the “masked man our yee-haw moment deserves.” Billboard recently called him “the unconventional Best New Artist pick the Grammy’s need.”

What’s beguiling about Peck, as opposed to gay singers such as Lil Nas X of “Old Town Road” fame, who went on Ellen to talk about coming out, or Ben Platt with his very personal Sing to Me Instead album, is that he seems reluctant to reveal many aspects of his identity, such as his age, but not his sexual orientation.

“I’m good with a whip,” he bragged in an interview with Playboy.

Such innuendo only makes people want to know more.

Based on his tattoos, eye color, and build, among other traits, some music sleuths have posited that Orville Peck is a pseudonym for Daniel Pitout, the drummer of Canadian punk band Nu Sensae, and a performance artist born in South Africa. Peck hasn’t confirmed that, but The New York Times reported in 2019 that his publicist did. The publicist also released a statement attributed to Peck.

“Whether or not Orville was the name I was born with is irrelevant,” Peck said in the statement. “I understand there is a temptation to try and unmask what I do, but to do so would be to miss the point entirely. All I ask is that people respect my work and, more importantly, my fans enough to maintain this crucial part of my expression as an artist.”

Speaking of masks, his trademark is a fringed mask that he began wearing before the pandemic, in a variety of colors, to conceal his identity. It’s not COVID-19 compliant. Peck says wearing a mask helps him and his fans focus on his music.

“We think masks are gonna hide something, but they actually expose so much,” he told L’Officiel in a 2019 interview. “You as the watcher also get to fill in the blanks, so it’s almost more engaging to an audience than if it wasn’t there. I also think there is a lot to be said about the security of a mask that allows you to be completely raw and candid… I also just think the mask looks cool.”

The masks “exist as a point of discussion, for people to add their own take on them,” he told the Times, which described him as a “campy butch Lone Ranger” with a “rich baritone and noir, spaghetti-western look” and “cerebral, salt-of-the-earth nature.”

“I don’t avoid questions about my life because I am trying to be obtuse,” he said. “I use it to enhance the artistry of what I do.”

In its October 2019 article, the publication said he “gave his age as 31” and that the videos from his first album “drip with Brokeback Mountain homoeroticism.”

In “Legends Never Die,” Peck also wears a painted leather jacket with rainbow flames on the back and what looks like chaps with spades on them and glittery jeans underneath. When he moves, it’s possible to catch a glimpse of the lower half of his face through the fringes of the mask.

Twain, 54, is a country music legend who is straight, but has a big LGBTQ following. In “Legends Never Die,” she wears a leopard print catsuit with gold fringe and a studded cowboy hat. Her outfit recalls the hooded leopard print ensemble that she wore (with matching leopard print luggage) in a 1997 hitchhiking video, “That Don’t Impress Me Much.”

Perhaps best known for “Man! I Feel Like a Woman” and “You’re Still the One,” the Canadian singer and songwriter has sold more than 100 million records since 1983, making her one of the best selling music artists of all time. Peck says she was a “huge influence on me” and “made me feel empowered” when he was growing up.

The video was filmed in Nashville at a drive-in movie theater – the type of venue where some musicians and comedians have begun to appear during the pandemic because it satisfies social distancing guidelines.

Peck and Twain sing on a makeshift stage for fans seated in their cars. Twain initially rides in on a motorcycle as Peck is about to start singing and interrupts the show, but Peck doesn’t seem to mind and joins right in. The non-singing celebrities in the video — Hall, Clermont, Brosnan, and Shaw – are part of the audience for Twain and Pecker at the drive-in.

“I still can’t believe we got THE Shania Twain” for the duet, Peck wrote on Facebook.

“I’m glad that @orvillepeck thought of me,” Twain responded on Instagram.

Waters says he’s a fan of both.