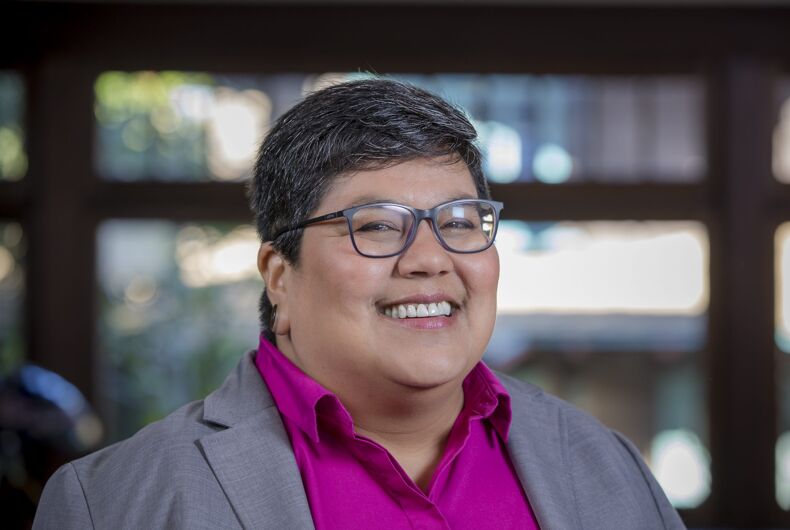 California Democrat Georgette Gomez is running for Congress to change the conversation.

“Being a queer Brown woman, it’s really important,” she told LGBTQ Nation, “Because you start shifting what conversations are being had at the highest level of our government, and you start influencing how legislation gets shaped.”

Related: When Black, queer women win, we all win

She has been proud to hold space, she said, that is not always accessible to people like her, and she will be proud to hopefully do so again.

“I’m going to be very proud to be fighting to start restructuring and re-envisioning what our systems should look like,” she said, “and to bring the Brown queer woman’s voice into the creation of that system.”

Among Gomez’s many priorities is an increase in housing availability for homeless LGBTQ youth. “The system is rigged against our LGBTQ community,” she said.

Gomez grew up in poverty as the daughter of undocumented parents. Her family experienced housing insecurity, lack of healthcare access, and abuse from employers who threatened to reveal her parents’ undocumented status if they complained about any mistreatment.

She believes these experiences give her an ability to connect with many people in her district, who she said are experiencing similar challenges. The 53rd, she explained, is made up of mostly people of color, many of whom are refugees and immigrants that live paycheck to paycheck and experience housing insecurity.

“The life I had when I was a young girl is the representation of my district… I will bring a strong voice that is grounded in real-life experience.”

She spoke passionately against Trump’s repeated attacks on immigrants and especially against his border wall. “I call the border our backyard in San Diego,” she said, adding that she introduced a resolution to have the city of San Diego on record opposing the border wall.

Trump’s attacks on immigrants, she emphasized, are personal for her.

“My parents are not dangerous. My parents are working members of a society that worked really hard to create better opportunities for my brother, my sister, and I, so they worked many many jobs, and they’re proud to have been able to create better opportunities for us, and I honor that every single day, and I want to bring that vision, that voice to DC.”

As City Council President, Gomez has prioritized increasing access to affordable housing (with a focus on banning income discrimination), as well as pushing for the full implementation of San Diego’s Climate Action Plan. Before her current role, she  also worked as a victims’ advocate for domestic violence and sexual abuse survivors and was the associate director of the Environmental Health Coalition.

Gomez, who has been endorsed by Senators Bernie Sanders and Elizabeth Warren, among many other political leaders and organizations, is up against fellow Democrat Sara Jacobs in the November 3rd general election. Gomez came in second place behind Jacobs in the district’s nonpartisan primary, which included a whopping fifteen candidates.

“To be the next Congressional member would be a great honor,” Gomez said. “I have lived these inequities firsthand.”

“The reason I am seeking to be the next congressional member for the 53rd is because I want to focus on tackling these issues. I want to focus on creating a more inclusive and better government that is uplifting people that have been left behind because of an intentional system that has been created, and it is time that we start dismantling that system and start investing in people.”