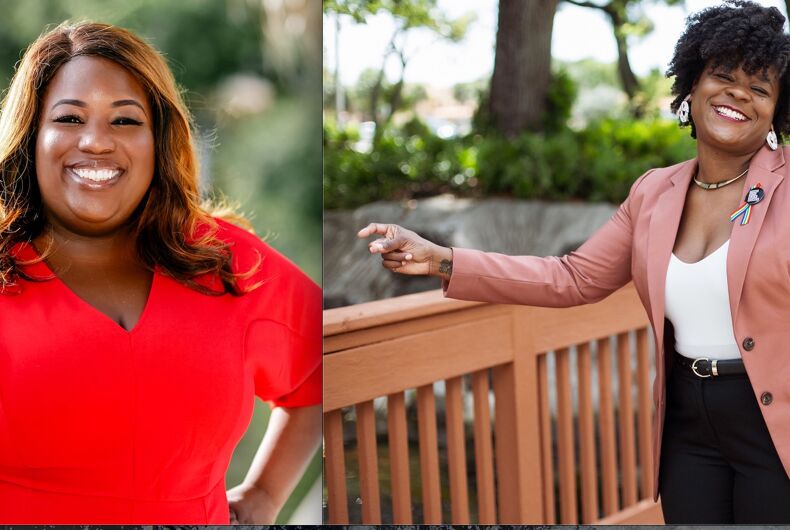 Democratic candidates Michele Rayner and Jasmen Rogers-Shaw could make history as the first Black queer women in the Florida legislature.

And both of them are fired up.

Related: Washington State may elect a progressive bisexual woman to Congress in November

Each spoke with LGBTQ Nation about their immense love for their communities and their deep desire to fight for them.

“District 70 has needed a fighter,” said Rayner. “It has needed an advocate. There are things that have been plaguing district 70 for a long time.”

“I’m rooted in people’s stories,” said Rogers-Shaw, running in district 95, “and rooted in knowing what we can do to do the most good for the most people, and that brings a certain level of accountability to the position that we all need across the state of Florida. If [elected officials] were more accountable to the people they serve, and if they were in direct community with the people they serve, maybe we’d have some different outcomes from our legislation.”

Rogers-Shaw has spent the past few years working in political advocacy, and was also Florida’s Black/African American Outreach Director on the Elizabeth Warren for President campaign. She is also running in one of the state’s poorest districts and said her priorities are protecting unions, increasing minimum wage, expanding Medicare, as well as defending abortion access and other types of reproductive healthcare.

Both candidates see their potential history-making wins as victories for all Black women.

“When one of us gets free, it opens the door for all of us to get free,” she said. “So I think it would be really special, and I think that knowing there are young women that will look up and be able to see me step into that [role] being very clear about who I am and being unashamed about who I am and knowing they are able to do whatever they want to do is what means the most to me.”

Among many other social justice cases, Rayner became known for representing the family of 28-year-old Markeis McGlockton, an unarmed Black man who was shot and killed in a parking lot by Michael Drejka. Drejka, a white man, claimed self-defense under Florida’s ‘stand your ground’ law.

This case, Rayner said, reminded her how significantly legislation can affect people’s day to day lives. She recalled McGlockton’s father telling her he remembered hearing arguments about ‘stand your ground,’ but he never thought it would come to his house.

“In that moment I understood how the law and the policies we write impact people’s day to day lives,” she said, “and the weightiness and the responsibility of that, so with that there’s a level of soberness I take into that. [Serving in the legislature means] understanding the privilege that you have to be able to create law, that you have to do it with people in mind, and that’s the way I practice law. I understand that whatever I do in this case, whether it’s a criminal case or a civil case, it’s impacting someone’s life, it’s their freedom, their family, their finances.”

Rogers-Shaw also has a people-centered philosophy.

“We need a legislature that is focused on people,” she said. “I know it feels so pie in the sky, but that’s what you’re sent there for; it’s not only to represent your district, but to build a healthier state… I have been working in the capital for years, so to be in committee rooms, to be on the house floor and to hear people over and over talk about these conditions, and yet we can’t get the votes we need to be able to do some of this common sense legislation is infuriating.”

Rogers-Shaw wants voters to know that she will continue putting community first.

The Democratic primary will be held on August 18.

The US needs to teach the Confederacy like Germany teaches Nazism