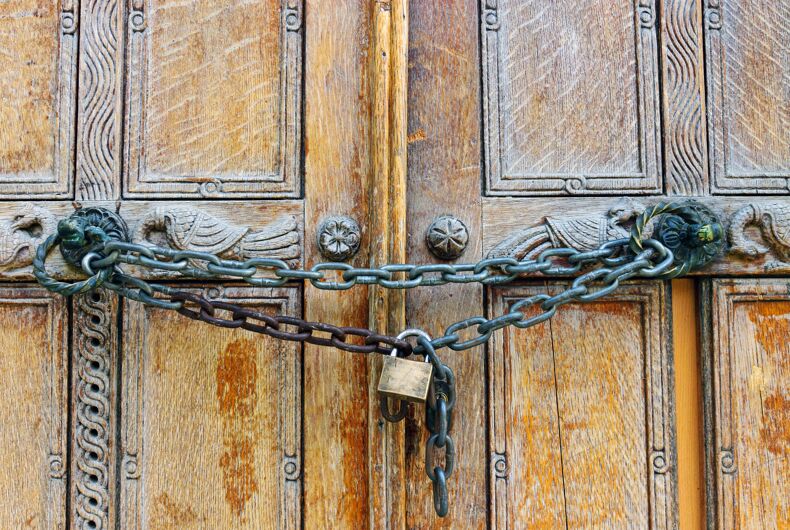 The Archdiocese of Detroit has kicked out two groups for LGBTQ Catholics, forbidding them from gathering on church property, and banned priests from holding mass for the groups. The move is the latest salvo in the church’s attacks on LGBTQ people in the United States.

Dignity Detroit, a group of LGBTQ Catholics who gather together to worship, has met for 45 years with the blessing of the church hierarchy. Fortunate Families Detroit, a support group for queer families, was also “forbidden from meeting in any parish church, chapel, or institution of the Archdiocese of Detroit,” according to a letter sent to the group.

“Fortunate Families Detroit provides a misleading and harmful message,” Auxiliary Bishop Gerard Battersby wrote. “Having such an organization, with its competing vision for the sanctification of her members, operating within the boundaries of the Archdiocese is both confusing to the faithful and detrimental to the very membership the organization seeks to serve.”

“As delegate of Archbishop Allen Vigneron, I ask that you immediately suspend meeting and disband your organization as a group claiming to be Catholic operating in the Archdiocese of Detroit.

“Dignity is still around, and we’re not going anywhere,” Frank D’Amore, president of Dignity Detroit, told the Free Press. “We just celebrated our 46th anniversary in May. We never went out of our way to embarrass the church hierarchy. We’re on our fourth Archbishop in 39 years, three cardinals. Now, all of a sudden, it’s an issue? I don’t get it.”

“We had no inkling” they were going to remove our group, Fortunate Families co-president Linda Karle-Nelson said. “It was surprising, shocking, it was hurtful. It means we lost our parish, our home base for many years. The pastor there is not allowed to associate with us. We’re no longer a group with a parish home. We’re not allowed in any Catholic parish. … That’s pretty harsh.”

Despite opposition from priests and parishioners, the church refuses to budge on the exclusionary and demeaning move.

“In recent years, the Archdiocese of Detroit has been committed to renewing and strengthening its ministry for members of the faithful who experience same-sex attraction and their families,” Holly Fournier, a spokesperson for the Archdiocese, said. “To that end, the Archbishop has appointed three priest chaplains for our local chapters of the Courage and EnCourage apostolates to minister to those who experience same-sex attraction and their friends and families.”

“We have communicated these developments to the leadership of Fortunate Families and Dignity Detroit, and we have invited all members to join us in efforts to participate in ministry that is faithful to the teachings of Christ’s Church,” she added. “Our desire is to provide pastoral care for and to ensure the salvation of all the faithful, including those who experience same-sex attraction and their families.”

The Catholic church has repeatedly pushed so-called “conversion therapy,” a discredited and dangerous practice meant to turn an LGBTQ person straight or cisgender. It has been denounced by every major medical organization and the United Nations as a form of torture.