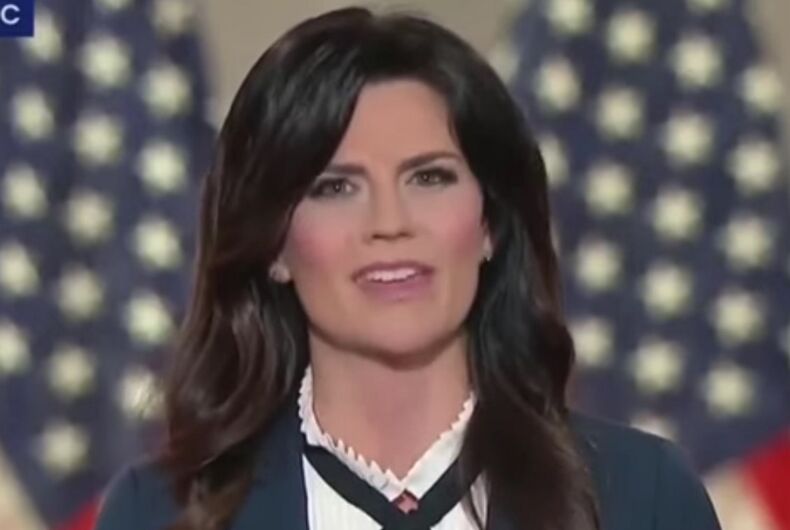 Trump said just last week that it’s his “great honor” to be the “most pro-gay president in American history,” but a conservative Christian activist at the Republican National convention just praised Trump for his constant attacks on LGBTQ equality.

She claimed that “voices of faith” have been “silenced” and “bullied” by Democrats. Lynch had a few examples of how the “Obama/Biden administration” oppressed Christians.

“Democrats tried to make faith organizations pay for abortion-inducing drugs,” she said, referring to Burwell v. Hobby Lobby, which was about contraception, not abortion.

Then she got to LGBTQ issues.

Christians have been fighting state and local restrictions on fostering and adoption agencies that have contracts with the government, arguing that the organizations’ religious affiliation means they shouldn’t have to follow anti-discrimination laws while still having access to government funding and control over children’s lives.

“Democrats pressured schools to allow boys to compete in girls’ sports and use girls’ locker rooms,” she continued, referring to transgender girls using the same facilities at schools as cisgender girls, instead of being forced to use boys’ facilities.

According to Lynch, the Obama/Biden administration advanced LGBTQ equality, but then the Trump administration immediately worked to roll back those rights.

“But then we, the people, elected Donald Trump,” Lynch said. “People of faith suddenly had a fierce advocate in the White House. He appointed judges who respect the First Amendment. He supported religious beliefs in court.”

“He ensured religious ministries would not be forced to violate their beliefs. He withdrew the policies that placed our little girls at risk.”

At the end of her speech, Lynch again made “religious freedom” entirely about attacking LGBTQ people: “Whether you’re a baker, a florist, or a football coach, they will force the choice between being obedient to God or to Caesar.”

The references to bakers and florists refer to how some businesses are getting penalized by state and local governments for refusing to serve LGBTQ people. The “football coach” reference is probably about transgender girls playing in school sports – a school coach’s religious freedom, apparently, includes the freedom to exclude people they don’t like from a school’s team.

To make her speech current, Lynch also said that measures taken to limit the spread of the coronavirus pandemic – which included asking churches not to hold large, indoor services during a pandemic caused by a virus that spreads best in large, indoor gatherings of people – were an attack on religious freedom.

“You know what truly is essential? Our right to worship freely.”