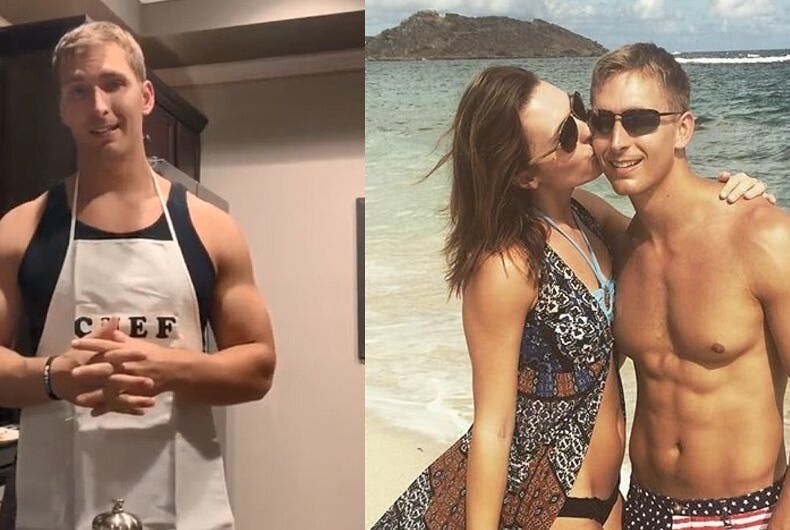 Jerry Falwell Jr. will reportedly score over $10 million for resigning as the head of Liberty University. But as he exits, another questionable relationship Falwell and his wife Becki have with a separate young man is garnering further attention.

While the couple pushed boatloads of cash to former poolboy-turned-paramour Giancarlo Granda through a sweetheart business deal involving a hostel in Miami, Falwell has been caught helping push through another business deal that benefited a different young, athletic man – their personal trainer.

Benjamin Crosswhite, a Liberty graduate, was 23 at the time the Falwells started using his services in 2011. Granda was 20 when the Falwells approached him to start a years-long sexual relationship.

Falwell accidentally sent a picture of his wife in a French maid outfit to several people – including Liberty employees – that was intended for Crosswhite as a “thank you” for helping his wife get in shape.

At the time, Falwell credited Crosswhite’s training with helping him lose 75 pounds. This week, he said the stress of learning Becki had “an inappropriate personal relationship” with Granda had caused the weight loss; he did not acknowledge being in the relationship as well.

“I lost 80 pounds and people who saw me regularly thought that I was physically unwell, when in reality I was just balancing how to be most supportive of Becki, who I love, while also reflecting and praying about whether there were ways I could have been more supportive of her and given her proper attention,” he wrote in a statement released before Granda went public.

“Becki and I developed an intimate relationship and Jerry enjoyed watching from the corner of the room,” he said earlier this week. “He enjoyed watching us in person and also remotely through video cameras. He also listened to our phone calls.”

He alleges he was approached by Becki Falwell at the luxury Miami hotel where he worked and was invited back to the older couple’s room.

“During my work shift at the Fontainebleau Hotel in March 2012, I was chatting with some girls my age (20 at the time),” Granda told Politico. “Becki said, ‘Those girls don’t know what they’re doing, you need someone with more experience.'”

“And then she goes, ‘But one thing.’ And I’m like, “Okay.’ And she’s like, ‘My husband likes to watch.’ And just then he comes out and he’s wearing a Speedo.”

Records show that Falwell took Crosswhite on a trip in Liberty’s private jet to Miami. Falwell said that his doctor is in Miami and he went for his annual physical and he wanted Crosswhite present to discuss his training and nutrition plan. Since Liberty requires a yearly physical for Falwell, he didn’t have to reimburse the university for the flight.

Granda said that their relationship eventually went south and when he tried to end the sexual relationship, they ended up in a business dispute that resulted in several lawsuits related to money the Falwells gave him to buy a hostel in Miami.

A year after meeting Crosswhite, Falwell urged Liberty officials to cut a “sweet deal” for the young man.

The deal was that Liberty would sell an 18-acre racquet sports and fitness facility for two million dollars to Crosswhite. Of course, the young trainer didn’t have two million dollars on-hand, so Liberty agreed to rent the facility from him for their tennis team and paid him $650,000 upfront for the first nine years of the lease. The other $1.2 million Crosswhite paid for the facility was covered by a loan that Liberty made to him at a low 3% annual rate.

A year later, Falwell sent an email to Liberty officials directing them to lease more gym space to Crosswhite’s business for $2,300 per month.

Falwell will get a $10.5 million severance package for resigning from Liberty University according to the Washington Post.

JUST so that you're not confused, THIS is not Falwell's pool boy, this is his trainer Benjamin Crosswhite.After a…