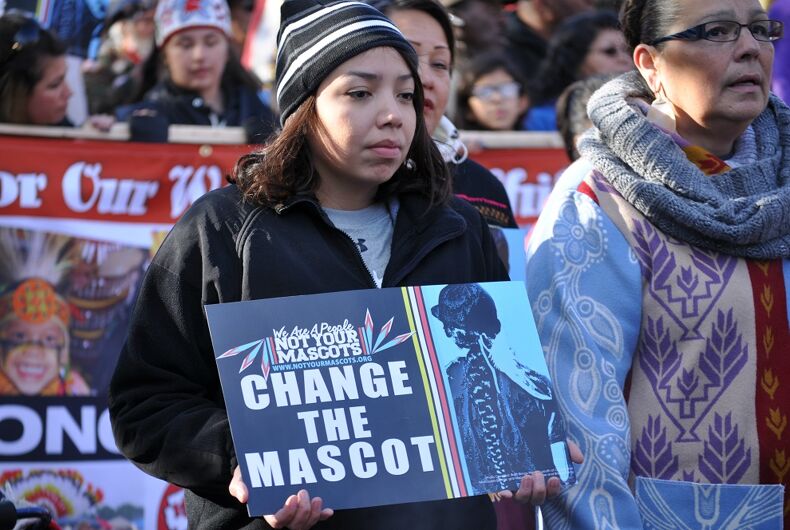 As we are about to enter football season in the U.S. during our current heightened civil rights era, controversy continues to swirl around a long-overdue public debate whether to change the name of the Washington Redskins football franchise.

Following repeated resistance over the years, and with increased pressure by corporate sponsors like Nike and FedEx, plus ultimatums by federal legislators, Dan Snyder, the team’s owner, has finally decided to reconsider changing the football franchise’s name.

Related: Here’s why symbols of America’s racist past should be rejected in modern America

In a recent team press release:

In light of recent events around our country and feedback from our community, the Washington Redskins are announcing the team will undergo a thorough review of the team’s name. This review formalizes the initial discussions the team has been having with the league in recent weeks.

Dan Snyder, owner of the Washington Redskins, stated, ‘This process allows the team to take into account not only the proud tradition and history of the franchise, but also input from our alumni, the organization, sponsors, the National Football League and the local community it is proud to represent on and off the field….

“We believe this review can and will be conducted with the best interest of all in mind.”

Some news outlets, like the San Francisco Chronicle, announced back in 2013 they would no longer use the word “Redskins” when referring to the team. Also in 2013, the Washington, D.C. City Council voted overwhelmingly to regard the team’s name as “racist and derogatory.”

According to a press release by the American Indian Movement (AIM) in the Twin Cities (Minneapolis and Saint Paul) calling for a protest at the game between the Minnesota Vikings and the Washington “Redskins”: “Retire the racist attire! Recognize that American Indians are a living people, not mascots for America’s fun and games!”

The team originally took the name “Boston Braves” at its inception in 1932 but changed it one year later to “Boston Redskins” while in Massachusetts.

At the center of this maelstrom, Snyder previously held firm by announcing he has no intention of changing the name, referring to it as a “tradition” and as a “badge of honor.”

In fact, on the wall of the organization’s Ashburn, Virginia offices hangs a commemorative plaque given to the team’s former coach, George Allen announcing: “Washington Redskins is more than a name we have called our football team for over eight decades. It is a symbol of everything we stand for: strength, courage, pride, and respect – the same values we know guide Native Americans and which are embedded throughout their rich history as the original Americans.”

As a Jew like myself, I ask Snyder to turn the tables on your National Football League team, the Washington Redskins, by imagining the name of his team as the “Washington Large Noses” under the team symbol of an old orthodox Jewish man, elongated full-nostriled nose, long white beard, and side locks streaming from his tired face, head covered with a black hat. In his right hand he has gently lifted a gold coin from a full leather pouch clenched in his left hand.

Well, Snyder, this is exactly the image I encounter each time I visit my ancestral hometown of Krosno, Poland and throughout the country when I conduct Holocaust and genealogy research.

The first time I visited Krosno in 2008, I walked casually around the town. On one of the main streets, I walked into a small jewelry shop where I looked to purchase an amber pendent for my mother. (Poland is renowned for its silver and amber jewelry.) As I perused the glass cabinet at the back of the store, I looked upward and saw a picture hanging on the wall over the cash register of what appeared to be a Hasidic Jew.

Taking me by complete surprise, I asked the owner, “Is that a Jew?” He responded, “Yes, it is.” The young women employee standing beside him, with a broad smile suddenly appearing on her face, looking my way said, “Yes, money, money,” rubbing together the thumb and index finger of her right hand. I then noticed in the picture that the Jewish man held a large golden coin in his right hand.

I left the shop with a tense uneasiness in my stomach. That evening at dinner, I asked my friend Kasia, a Polish native, what this image in the shop meant. She expressed to me what I had anticipated that the image represented and exemplified the stereotypical notion of the “rich Jew.”

I later learned that one can find similar pictures in non-Jewish Polish homes, banks, businesses large and small, work offices, and studios as supposed “good luck” symbols to bring wealth to those who own and enter the space. Some of the pictures contain the caption: “Żyd w sieni pieniadze w kieszeni” (“A Jew in the room, a coin in the pocket”).

Either one day per week (usually on the Jewish sabbath between Friday at sunset and Saturday at sunset) or on January 1 of each year, the pictures’ owners hang the Jew upside down for a while to assure them greater wealth during the week or in the new year. I witnessed similar pictures and even Orthodox Jews as bobble head dolls for sale throughout Poland.

Ever since that day I first noticed the Jew hanging on the wall of the jewelry shop, a gnawing sensation has overtaken my consciousness because I failed to speak up to the shop owner. While back in Krosno two years later, I walked into the shop and expressed to the owner, while I donned a rather friendly though assertive tone, that I considered the picture to be offensive to myself as a Jew.

“Oh no,” he replied, “Not offensive. My Jew is my talisman bringing me money.”

At this point he removed the picture from its hanging spot, and turning it upside down placed his hand beneath to symbolically catch the coins pouring from the Jews leather pouch.

I repeated my initial statement, though he simply smiled and actually laughed at me. Though I knew he would probably never understand, at least in the short term, I walked from the shop with my head held erect, with my dignity and integrity fully intact, an ease coming over my soul once again.

The very few Jews who currently reside in Poland comprise a virtually invisible minority to most Poles, and while literally millions of First Nations people inhabit the United States today, they as a group remain largely invisible to most other Americans.

The image of the rich Jew in Poland and the so-called brave savage “Redskins” in football and “Braves” in baseball, and countless others sports teams, were constructed through a historically revisionist and romanticized lens, back to some fairy-tale time and place where the Pole treated the Jew as an equal and respected member of Polish society, and where the European settler (a.k.a. “invader”) broke bread in some mythological first Thanksgiving in “the natives,” which set up conditions for peaceful coexistence and trade up to this very day.

This so-called “honoring,” taking “pride” in, and “respecting” Native Americans by the cultural descendants of those who engaged in forced evacuations, deculturalization, and genocide of native peoples, and those hanging pictures of Jews in places where Jews had been shunned, scapegoated, and slaughtered previously strikes as hypocrisy at best, and more like justification for further colonization and misappropriation of cultural symbols, in addition to racist stereotyping.

As a genuine step in the direction of truly honoring and respecting other people, the cultural imperialism must end.