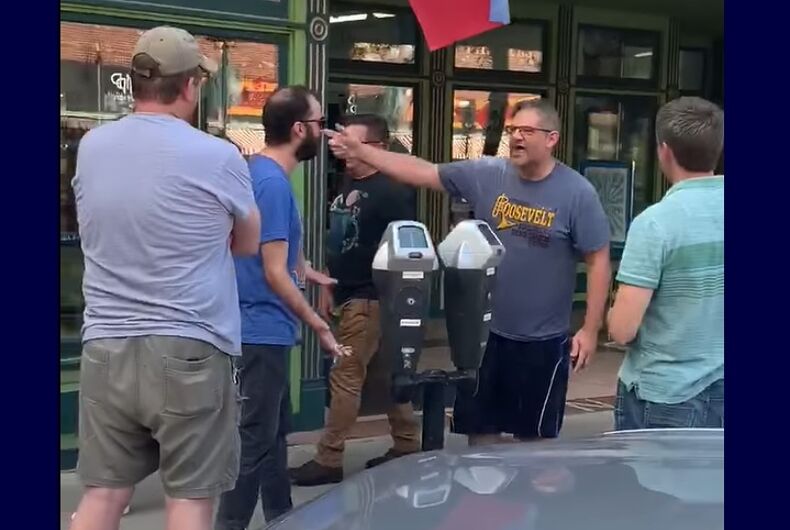 A white man was caught on video shouting anti-gay and racist slurs in front of a restaurant in South Dakota as police refused to intervene.

Multiple people called police to report a man this past Monday who was shouting in front of the Carpenter Bar in downtown Sioux Falls, but a police spokesperson said he had a “free speech” right to shout the n-word and “fa***t” at the crowd.

Related: A stranger hurls abuse on a gay man in public in a disturbing viral video

The man appears to have been doused with water before the start of the video that was posted to Facebook by Sioux Falls resident Andrea Lynn, although it’s unclear if he started his rant before or after he got wet.

“Sorry for the horrible language but this happening in Sioux Falls right now,” Lynn wrote in the caption for the video. “Driving by calling everyone outside fa****s and n*****s. Got a bucket of water thrown on him and said he was assaulted. Let’s do better SF.”

In the video, he appears to be shouting at people at the restaurant, which was flying the rainbow flag. He calls the restaurant patrons a “mob” and suggests that someone is going to hit him with a bottle, as someone calls him an “a***ole.”

He then calls someone the n-word – there appears to be one Black patron at the restaurant while the rest of the patrons are white – and shouts, “How much violence are you OK with?”

People tell him to leave, and he accuses the crowd of being “Nazis” who are “silencing” him.

Sorry for the horrible language but this happening in Sioux Falls right now. Driving by calling everyone outside fa****s and n*****s. Got a bucket of water thrown on him and said he was assaulted. Let’s do better SF.

Sioux Falls police spokesperson Sam Clemens said that the police couldn’t arrest him because he had a “free speech” right to shout at restaurant patrons.

“What he’s doing really falls under free speech, so there’s really no laws that are broken,” Clemens said.

“Disturbing the peace” is banned by an ordinance in Sioux Falls, which defines it as including “violent, tumultuous or offensive conduct” and “obscene, indecent, violent or threatening language.”

So it might be a surprise for people to learn that his actions were perfectly legal after months of watching people get arrested for participating in generally peaceful protests.