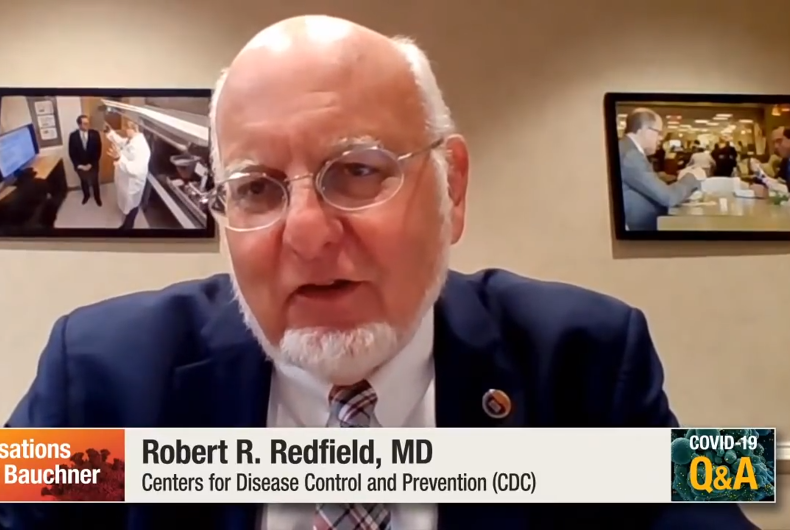 The coronavirus pandemic would be under control in the United States within two months if citizens would only start wearing masks. The simple COVID precaution has become a political flashpoint in recent months, stirred by Donald Trump.

While Trump has continually downplayed the virus, with disastrous results, health experts have regularly contradicted the president’s unscientific (and frequently deadly) advice like consuming cleaning products to kill the virus. All government health agencies recommend wearing a mask and it is required in several states and by some businesses.

Despite Trump’s reluctance to embrace the easiest coronavirus prevention method, the Centers for Disease Control and Prevention (CDC) Director Robert Redfield unequivocally endorsed the practice in an interview with the Journal of the American Medical Association’s Dr. Howard Bauchner.

“The time is now,” Redfield said. “I think if we could get everybody to wear a mask right now I think in four, six, eight weeks we could bring this epidemic under control. I think we’re being very clear now. Now’s the time to wear a mask.”

Coronavirus infections have soared in states that have not taken adequate precautions lately with Texas, Arizona, and Florida hit the hardest. All three states have Republican governors who have joined Trump in downplaying the virus’s danger.

According to a new report by the CDC, wearing a mask dramatically lowers the risk of a person who isn’t showing symptoms infecting someone else.

“With the potential for presymptomatic and asymptomatic transmission, widespread adoption of policies requiring face coverings in public settings should be considered to reduce the impact and magnitude of additional waves of COVID-19,” the report says.

“Breathing in a small amount of virus may lead to no disease or far more mild infection. But inhaling a huge volume of virus particles can result in serious disease or death.”

Walmart announced today that it would require all shoppers to wear a mask.

There have been almost 3.5 million confirmed infections in the United States so far. Over 138,000 people have died nationwide.