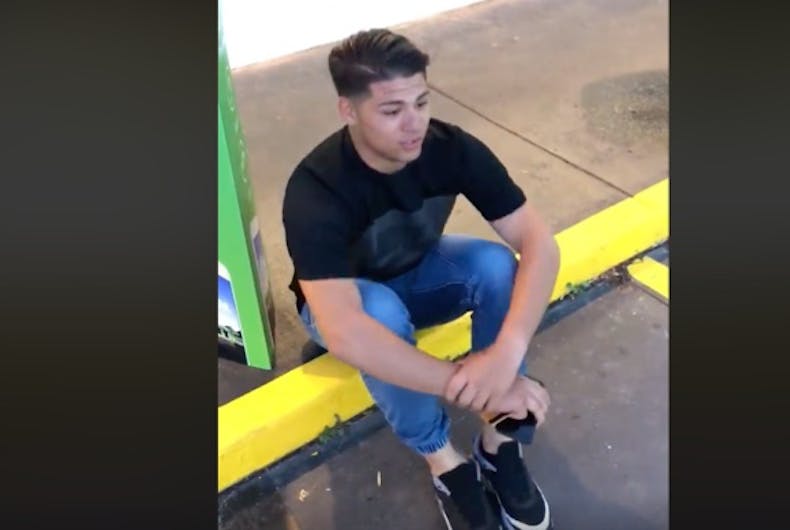 This guy hurled anti-gay slurs at a man filling up his car at a gas station.Photo: screenshot

An actor in Australia recorded an encounter with a really angry homophobe in the parking lot of a gas station. Brendan de la Hay said that he was filling up his car when the man noticed his flamboyant clothing and called him a fag.

The abuse continued, so Brendan recorded it on his phone.

“Look what’s your problem?” the man says as Brendan took out his phone.

“My problem is you called me a fag,” Brendan responds.

“I didn’t call you a fucking fag.”

“I called you a fucking gay c–t, you’re a fucking fag.”

He also promised the anonymous hater that his face would be on television. The man said that the news won’t show it, and “They won’t even support you, you fucking fag.”

Brendan said he wasn’t affected by the abuse because it happens so often to him.

“I kind of feel slightly desensitised to abuse such as this because I have dealt with it my entire life,” he told Yahoo! News.

“I had the same thing happen to me just last week at Potts Point and then I thought ‘I’m sick of people doing this, I’m going to start filming it whenever it happens.'”

Brendan says that he’s not going to tone down his look because people shout at him in the street.

“Men who are more contemporary than other men, or other performing men reach out to me and ask how can I wear what I do?” he said. “They say they’re too scared to do the same in public.”

“My close friends are spectacular performers but they hide, they dampen themselves throughout the day.”

He said he wasn’t surprised that this happened so soon after the national postal referendum on marriage equality.

“It’s dangerous because it’s opened the door to let people think they can vote on anything and have an opinion on anything,” he said.