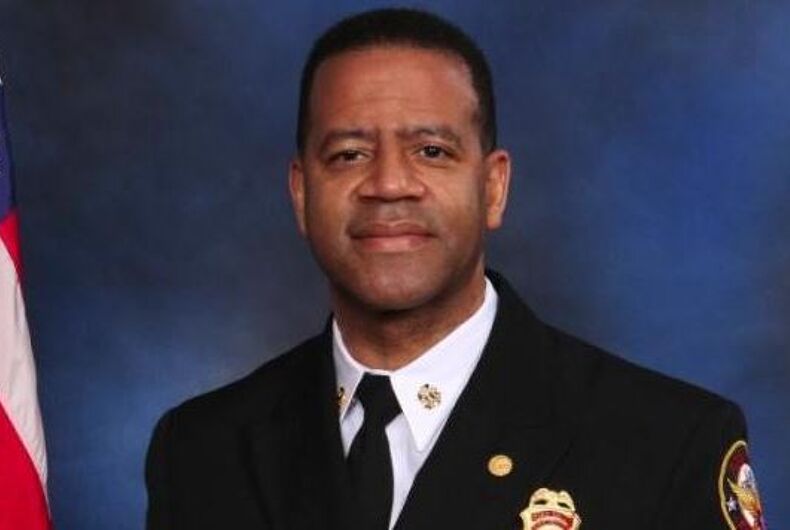 The former fire chief of Atlanta has lost his discrimination case, a federal court ruling on Wednesday that the city had the right to fire him after he passed out an anti-gay book and then campaigned against his subsequent suspension.

Kelvin Cochran passed out a book he self-published, called Who Told You That You Were Naked, at work, leading to his suspension. In it, he condemns gay people as sinful and cursed, and likens homosexuality to pederasty and bestiality.

Cochran then tried to rally his Christian allies to contact the mayor, including a Georgia Baptist Convention call to action. This ultimately led to his termination.

He then sued the city and the mayor, Kasim Reed, claiming his religious freedoms had been violated. He was represented by the far-right conservative legal group Alliance Defending Freedom, the group that is also defending Jack Phillips, the Colorado baker who refused to make a cake for a same-sex couple’s wedding and is now having his appeal considered by the U.S. Supreme Court.

In a 50-page ruling, U.S. District Judge Leigh Martin May found that the city had every right to fire Cochran, as he had a supervisor distribute his book in the workplace. It was therefore, the court decided, “not unreasonable for the city to fear” that his expressed view “that the death of all individuals who engage in homosexual and extramarital sex would be celebrated” might cause “public erosion of trust in the fire department.”

The court also dismissed his claim of not being granted due process, noting that he was an at-will employee who could be dismissed with or without cause.

“This lawsuit was never about religious beliefs or the First Amendment,” City Attorney Jeremy Berry told the Atlanta Business Chronicle. “Rather, it is an employment matter involving an executive in charge of more than 1,100 firefighters and tasked to lead by example.”

The court did rule in favor of Cochran in declaring the city’s rule that employees must get clearance before engaging in behavior such as publishing a book, or seeking other outside employment, too broad. It will rule on that issue at a later date, after both sides have submitted opinions.

The Alliance Defending Freedom released a press statement celebrating the fact that the court ruled against the city’s clearance rules, while ignoring that he lost the bulk of his case.

“With respect to the single question remaining – whether the city’s conflict of interest and outside employment pre-clearance ordinances are appropriate – the city looks forward to demonstrating the need and propriety of these ordinances at trial,” he said.