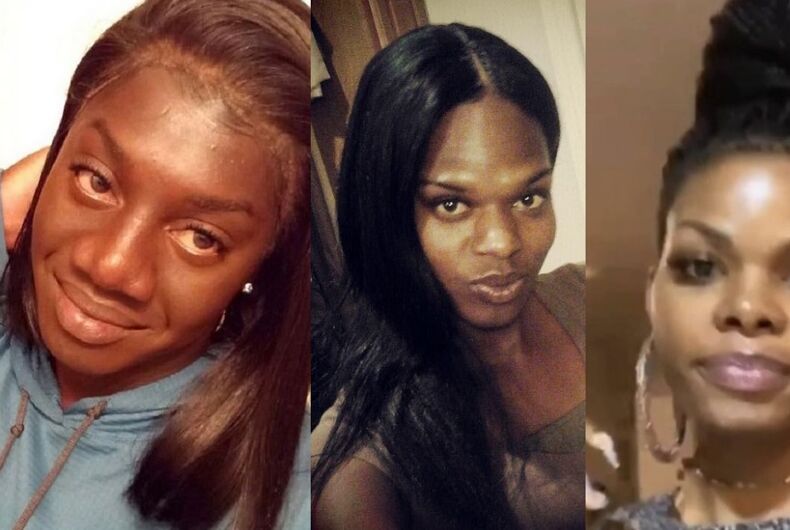 Bree Black, 27, of Pompano Beach, Florida was shot this past Friday night. Police said they responded to a report of the shooting and found Black with a gunshot wound. Ten minutes later, when fire rescue showed up, she was pronounced dead at the scene.

Police are searching for the people who killed her.

“We want some immediate answers to what’s going on and we want this investigation to be done with full integrity,” Black Lives Matter organizer Tifanny Burks told the Miami Herald at a gathering this Sunday afternoon to mourn Black’s death.

Journalist Bianca Pedró Ocasio tweeted video of an altar set up by activists for Black.

Here’s a small altar for Bree. Organizers say they’re hoping to get in touch with her family & friends. pic.twitter.com/JSzxMsbz0Z

The body of Black transgender woman Shakie Peters, 32, was found near a road in St. Helena Parish, Louisiana.

Police believe her death was a homicide, and St. Helena Parish Sheriff’s Office said that they are investigating a person of interest in the case. They have not released the names of a suspect yet and they have not said what they believe is the motive.

“Shakie was a very independent person and very loyal to her friends,” Peters’s friend Natahalie Nia Faulk told the Louisiana Advocate, calling Peters the life of the party.

“She was full of laughter and an abundance of life.”

Faulk said that she met Peters at the funeral for a mutual friend, who was also a transgender woman.

“It’s traumatizing whenever we see [a killing] because we think, ‘Will they be honored in their death?'” Faulk said.

“It’s a personal violence and whenever we die, often police or others don’t recognize the life that came before it,” she added, referring to how the St. Helena Parish Sheriff’s Office identified Peters as male.

The family of 21-year-old Black transgender woman Dawn Manson is looking for her, saying that they last heard from her on Thursday night when she sent a text message to family saying she was depressed and having trouble with a man.

“She can’t take it no more, that this is it, how much she loved me,” her mother Lateea Neely said.

Neely was last seen in San Francisco but her family said that her phone showed that she was in the Pittsburgh, Pennsylvania neighborhood of West Mifflin. That’s where her family is searching for her.

“We’re going to break up and canvas the woods and canvas this whole area until I find my daughter,” Neely said.

“I need my baby back,” Neely said. “If anybody knows, please bring me my baby.”