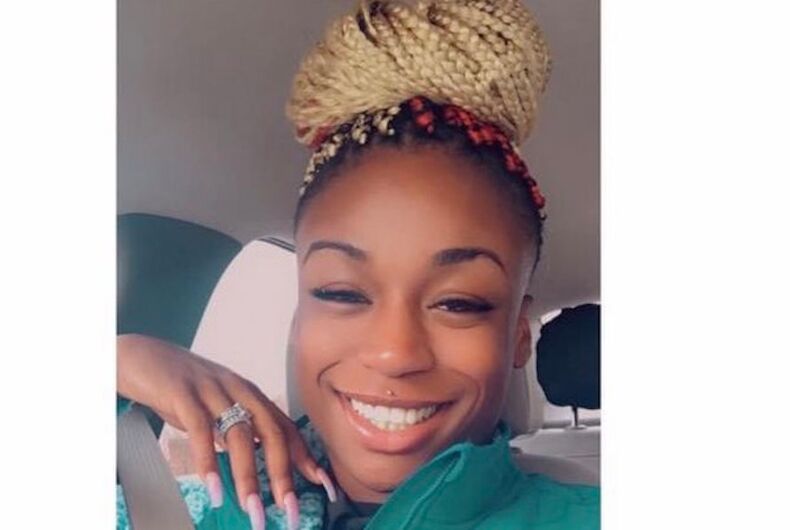 At 6:15 a.m. on Tuesday morning, a 22-year-old Black transgender woman named Merci Mack was found shot to death in Dallas, Texas. She died on the scene and is believed to be the 18th trans woman to be murdered this year, according to HRC.

The Dallas Police Department deadnamed her, referring to her by her former first name in early reports.

Related: Police are staying silent about the murder of 17-year-old transwoman Brayla Stone

Mack’s body was found unconscious in a parking lot of the Rosemont Apartments by a passerby. Local residents said they heard gunshots around 5 a.m. the same morning, but police haven’t identified any suspects or a motive yet. They are now asking citizens for help.

In a statement on her murder, Dallas Police deadnamed Mack even though the statement identified her as a transgender woman.

“After contact with next of kin, it was determined that the victim’s legal name was [deadname],” the statement said. “We have not been provided with a preferred name at this time.”

The police have asked anyone with information about Mack’s death to call the Crime Stoppers hotline at 214-373-TIPS (8477). They’re offering a $5,000 reward for any information that might lead to her murderer’s arrest.

“Her friends say that Merci Mack was a young, upbeat soul who deserved to experience a full life,” said HRC’s Tori Cooper. “HRC is mourning with Merci’s loved ones and are calling for a full, thorough investigation into her death.”

The Dallas Morning News points out that Texas currently leads the nation in murders of transgender people. The state has had 15 anti-trans murders in the last five years and nearly half of them have happened in Dallas. The actual number could be even higher due to underreporting and misgendering of victims.

Florida and Louisiana rank second and third for the most anti-trans murders in the last five years.

Among the trans women killed in Dallas were Muhlaysia Booker, who was shot to death, and Chynal Lindsey, who was found near White Rock Lake. Several other trans women have also been attacked but survived.