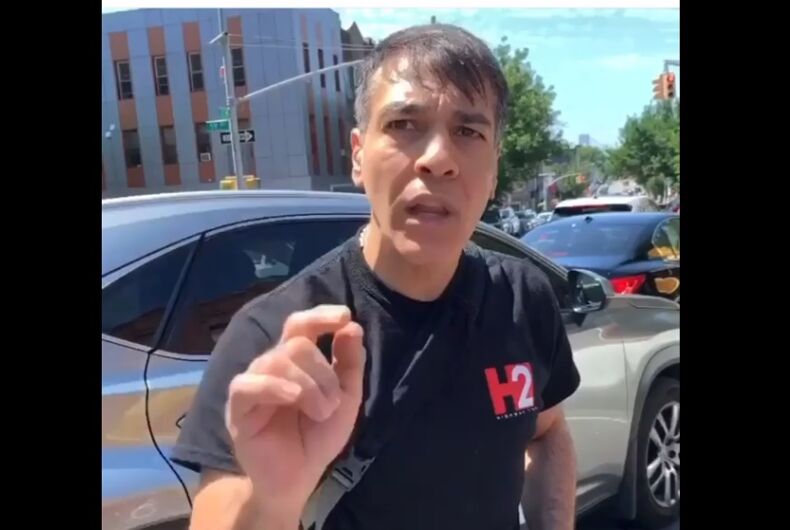 A New Yorker was caught in an anti-gay, racist, and ableist rant in a video that is going viral.

A video posted to the Instagram channel “Karens Going Wild” shows a bicyclist in calling an Asian man a “fa***t” and making fun of his eyes, saying that his “$11,000 bike” is worth more than the victim’s car.

The video was submitted by a man who was driving his car behind the bicyclist in a predominantly Asian neighborhood in Brooklyn and the bicyclist was swerving, so the driver gave him a “light honk to let him know I was behind him.”

He said that the bicyclist caused a commotion and called the police, and that’s when he started recording. The bicyclist tried to knock the phone out of his hand and then he yelled at the driver.

“Why don’t you just act like a man? We’ll go around the corner and I’ll f**k you up, you p**sy-ass bitch,” he said as the driver taunted him. “You almost ran me over with your car, you f**king retard, you inbred motherf**ker. You know why you guys are all f**kin’ slant-eyed? Because you’re f**kin’ in-breds. If you see any ret**ds, they look like you, either they’re black, or-”

He then put his finger near his eye in a common anti-Asian racist gesture.

“You don’t think I belong in this neighborhood. I was born here. you’re not gonna run me over on my streets,” the bicyclist says. “You’re a weak yellow motherf**ker. You’re the weakest race on the planet. The weakest. I come from the strongest, bro.”

The driver said that the fire department and an ambulance showed up because the bicyclist claimed to be injured.

“I’ve never seen so many authorities roll their eyes all at once,” he wrote.

The video has been viewed over 120,000 times since it was posted two hours ago.

#New York In the end “He brought the entire fire department and ambulance out because he was "injured" and then when they came, he proceeded to say that he was fine but wanted me arrested. To be very honest, I've never seen so many authorities roll their eyes all at once”. “Furthermore, he kept trying to harass Asian residents of 7th & 8th Ave., who came out to see what the commotion was about and were recording the entire thing in case he lied (which he did). While speaking with them, I also discovered that he apparently has a long history of doing this exact same thing to other Asian community members-unfortunately, many of his previous victims have been older Asian immigrants, unable to understand his racist language or DEFEND themselves due to the language barrier.” | | | | #pavelpaulinich #karensgoingwild #karen #kevin #racist #maga #racism #trump #equality #protest #protest #school #viral #viralpost #trending #asian #blm #karens #staywoke #car #roadrage #bike #bikers #asianamerican #usa #nyc #nycblogger #brooklyn #brooklynbridge #bikelife