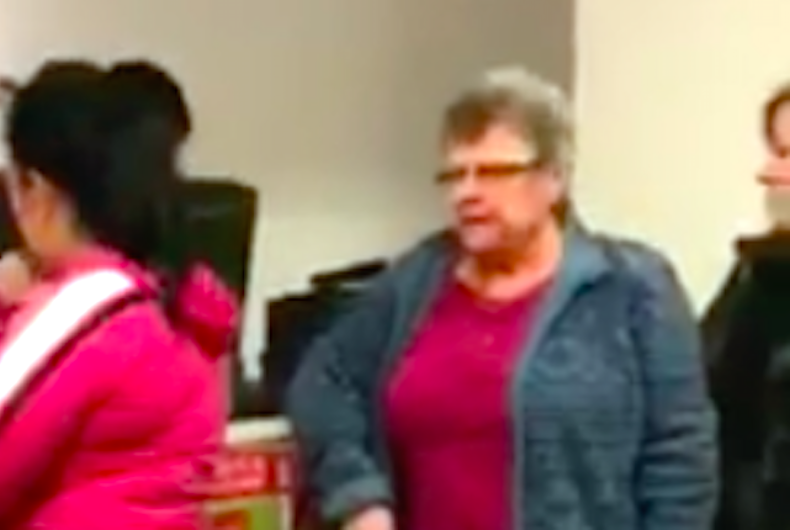 The woman went on a racist anti-Latino rant in a JC Pennys.Photo: screenshot

Jefferson Mall in Louisville, Kentucky doesn’t want one old lady spending her money in their stores. No, not a silver haired power walker, this foul mouthed granny is the star of a viral video of her racist meltdown at the home of senior shoppers nationwide – JC Penny.

The unidentified woman became angry after a shopper brought items to the counter as her friend was checking out. Apparently gramma drank too much Sanka at lunch, because she came unhinged and launched into a racist tirade aimed at the Latino women.

“Just go back wherever the f*ck you came from,” she told the other customers. “Hey, tell them to go back where they belong. You know, they come here to live and they act like they’re everybody else. Get in the back of the line like everybody else does.”

She went on to suggest that the women were purchasing their Christmas presents with welfare money.

“We are aware of the video posted online today from inside JCPenney,” officials said on the mall’s Facebook page. “Jefferson Mall strives to create a comfortable and convenient experience for all of our guests and we absolutely do not condone this type of behavior. We will work with JCPenney to identify this woman and, once identified, she will be permanently banned from Jefferson Mall, per our Behavioral Code of Conduct.”

Not one single person in line spoke up in the Latino women’s defense. Not. One.

Donald Trump easily won Kentucky in the recent presidential election after appealing to racists, anti-Semites, and the religious right in the state.