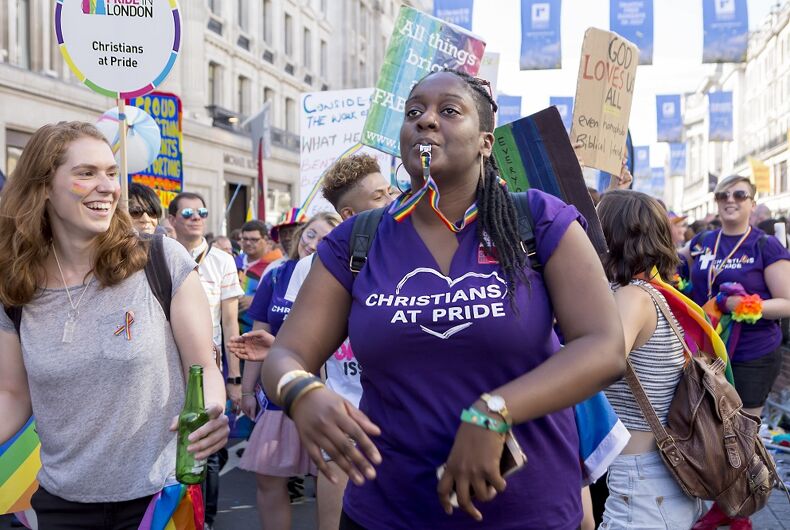 Queer Christians make themselves visible at Pride in London in 2017.Photo: Shutterstock

Daniel Villarreal covered Believr on LGBTQ Nation as the app first started its development stage, addressing age-old questions on what the Bible says about the queer community (for those answers, visit the Reformation Project).

When the app first started, it was primarily a dating app for LGBTQ Christians. Now the founders say the app will go much further, seeking to bring the community together where people can find not just dates, but also friends and support resources.

The app is also open and welcoming to all LGBTQ people of faith, not just Christians.

“It’s about 75% of the way there,” Believr co-founder Brandon Flanery said. “We were looking at launching [the app] earlier this year, but COVID happened.”

Because of the pandemic, the founders started hosting weekly, virtual meetups Wednesday nights to keep the community connected. Every other week, they have a different guest speaker to touch upon topics that affect the community.

“We wanted to make announcements and updates” about the app, said Adam Evers, another co-founder of Believr. “But it felt inappropriate — the main reason being that our brothers and sisters and family of color are suffering right now. They’re feeling pain and we wanted to acknowledge that.”

Their team estimates that the app could launch as soon as September or October of this year, or next February at the latest.

Believr ran low on funds, and the creators blame the pandemic. To get more funds, they created a paid version of the app called “Spectrum.”

Unlike other apps, Believr won’t tie down users to their precise location, allowing people to connect across the country.

The app’s main feature uses a values quiz to connect people with shared outlooks, like putting together people who value money or family. The app’s community spaces will revolve around shared-interest topics.

Spectrum will have more refined location settings, allow users to look at more information in profiles, and offer discounts on exclusive content. Best of all, the paid version allows gifs.

“The vast majority of our team is straight — over 80% aren’t even Christian,” Flanery said. “They rally behind us because they know this app is needed. Everyone is worthy of love. Specifically, when it comes to being gay and Christian, there’s that pressure of ‘I’m too gay for Christians and too Christian for gays.’ You are worthy of existence and a place that tells people that is so important.”

“We’ve had giants that we’ve stood on the shoulders of [while making this app], but there’s still this lack of representation among the broader community,” Evers said. “So for people to see representation of other people who are like them is so important. And deep down, I hope that Believr can be part of a movement of change in how Christianity views homosexuality.”

Their team’s goal for the app is to help normalize LGBTQ people of faith so they feel less alone.

The app is meant to provide the community with the opportunity to go on dates with people that share their values as well.

The Believr team uses their funds to support other community organizations like the Martha P. Johnson Foundation, so purchasing the paid version of the app not only supports their team, it strengthens other LGBTQ organizations.

Will mainstream media finally start talking about the genocide of LGBTQ people in Chechnya?