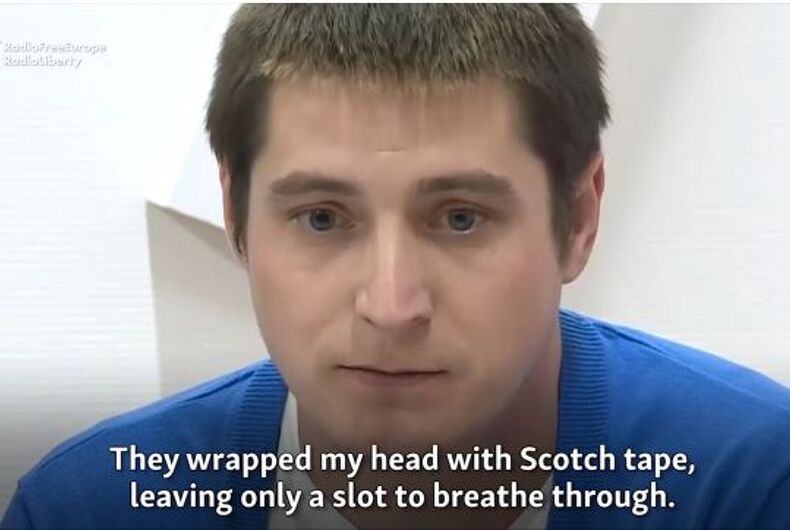 Maxim Lapunov talks to reporters about his horrifying experiences in a secret prison in Chechnya.Photo: Screenshot/Radio Free Europe

A couple of years ago, vague reports started to surface, mostly in LGBTQ outlets and not mainstream media, about the widespread roundup, torture, and murder of gay and lesbian people in Chechnya, a republic within the Russian Federation.

There weren’t a lot of details, but there was talk of camps where the Chechen leader, Ramzan Kadyrov, would bring innocent victims that had disappeared from their homes, abducted by the government and then imprisoned and executed in a mass genocide.

Related: The shocking stories from survivors of Chechnya’s gay torture camps will haunt you

Of course, these reports were ignored by the Russian government, led by Vladimir Putin who has not only been a longtime opponent of LGBTQ people in his own right but has actively led a campaign against our community going back many years.

In an interview with Larry King back in 2013, in the context of the proposed boycott of the Sochi Olympics due to Russia’s human rights abuses, I talked about the importance of LGBTQ people here in America, who had recently seen a great deal of progress towards equality within our own borders, supporting our fellow community members abroad who were facing much more difficult opposition. Even compared to the terrible plight of LGBTQ people in Russia, what has happened to LGBTQ citizens of Chechnya is unparalleled in its horror and brutality.

The new HBO documentary Welcome To Chechnya will hopefully finally give this issue the attention in mainstream media that it deserves.

It shows the heroic work of an organization in Chechnya that is dedicated to extracting LGBTQ people who are in physical danger, helping them seek asylum, and flee to countries where they will be safe. It gives you a front-row seat to the nightmarish existence that so many are living through every single day.

One of the most shocking and appalling moments is at the end of the film where they give statistics regarding LGBTQ refugees from Chechnya since 2017.

Joe Biden, who will hopefully become President of the United States in a little over 6 months, will take on this crisis with urgency as soon as he takes office. We know, from his time as Vice President, along with the work the Biden Foundation has done on LGBTQ rights both domestically and internationally in the last several years, that this is obviously an issue he is deeply committed to.