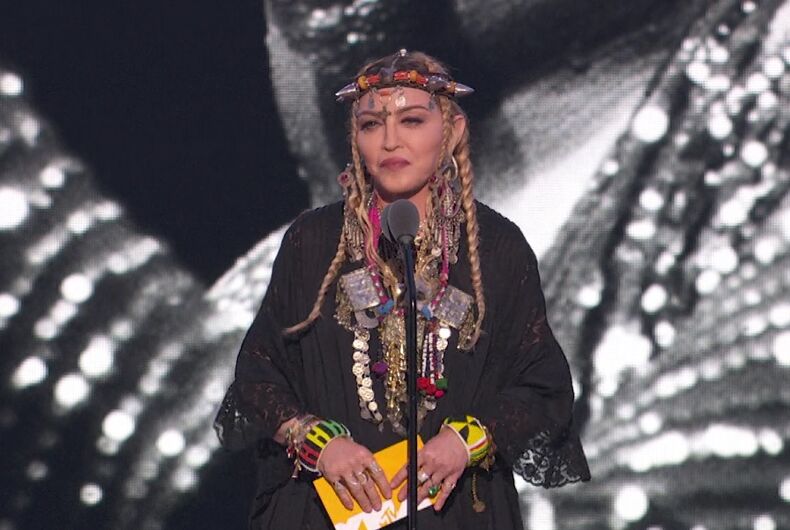 Standing in front of a giant image of Aretha Franklin, Madonna gave a speech about... her own journey to stardom.Photo: Screenshot/MTV

Madonna has courted controversy for her entire career, but she may have finally taken it too far.

The singer posted a video to Instagram that was shared by Donald Trump on Twitter that featured a quack physician, Dr. Stella Immanuel, who claims hydroxychloroquine can cure COVID and that infertility is caused by having sex with demons in your sleep.

Madonna removed the post after the service blocked the video originally, saying the content contained false information, before the singer deleted it.

In the post, she claimed, “The truth will set us all Free! But some people don’t want to hear the truth. Especially the people in power who stand to make money from this long drawn out search for a vaccine Which has been proven and available for months. They would rather let fear control them and let the rich get richer and the poor and sick get sicker.”

“This woman is my hero … Thank you Stella Immanuel.”

Immanuel says that masks are not necessary in the video, but that’s hardly her most unusual fake medical claim. She also runs her own ministry and regularly intertwines the two professions to astounding results.

Immanuel has previously said that cysts and gynecological issues are caused by “demon seed” and that demons steal men’s sperm to reproduce. She also believes the Illuminati has manufactured vaccines using alien DNA and that Magic 8-Ball toys accurately foretell the future.

Madonna has flirted with COVID quackery before, calling the virus “the great equalizer.” After testing positive, she was seen hosting gatherings at her home and wrote that she would take a drive to “breathe in the COVID-19 air.”