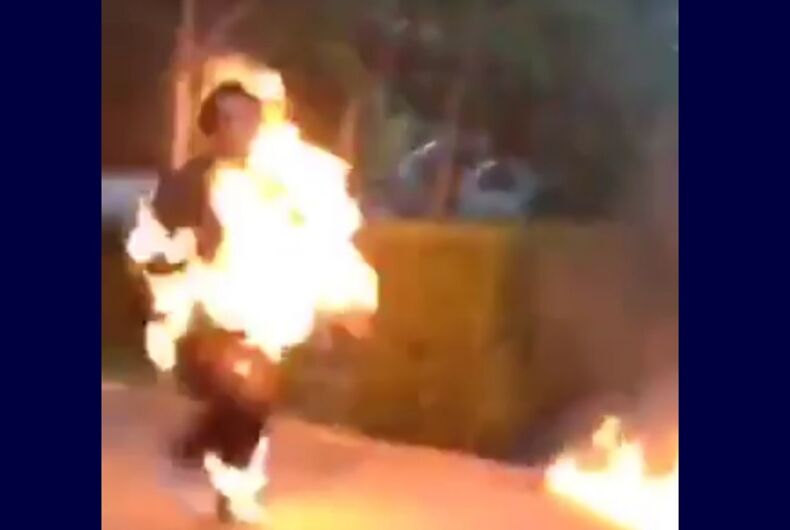 A transgender woman in Georgia set herself on fire to protest how her government is treating transgender people during the coronavirus pandemic.

Madona Kiparoidze set herself on fire in front of City Hall in Tblisi and was captured in a Facebook video that was posted on Planet Transgender. Police chased her and took off her jacket, which was on fire, before they arrested her.

“Today, a trans woman tried to commit suicide in front of Tbilisi City Hall to protest the Georgia Government’s inaction and ignorance towards them during #Covid19 crisis,” Tbilisi Pride co-founder Tamaz Sozashvili tweeted.

Today, trans woman tried to commit a sucide in front of #Tbilisi City Hall to protest @GovernmentGeo's immobility and ignorance towards them during #Covid19 crisis.

“I am a transgender woman, and I’m setting myself on fire because the Georgian state doesn’t care about me,” she said after she was arrested, according to a translation on OC Media.

Another protestor told a local TV station: “We can’t even pay for our rent. What can we do?”

Georgia only allows transgender people to update the gender marker on their identification if they undergo bottom surgery. The country’s health care system doesn’t cover the cost of the surgery, which puts documents that conform to one’s gender identity remains out of reach for many transgender people in Georgia.

The Georgian organization Women’s Initiatives Supporting Group (WISG) issued a statement in March denouncing how the country’s stay-at-home order has unfairly affected some groups of women, including transgender women who are often unable to find work because of anti-transgender discrimination in the country.

“Consider women engaged in sex work, especially transgender women, as a group of special needs and help them according to their needs, for most of them lack moral and financial support from their own families,” the statement told the government.

“Furthermore, many of them live on rent, which they are unable to cover and they cannot afford to meet their basic needs in social distancing conditions due to the specificity of their work.”

HIV transmission rates are down because of stay-at-home orders