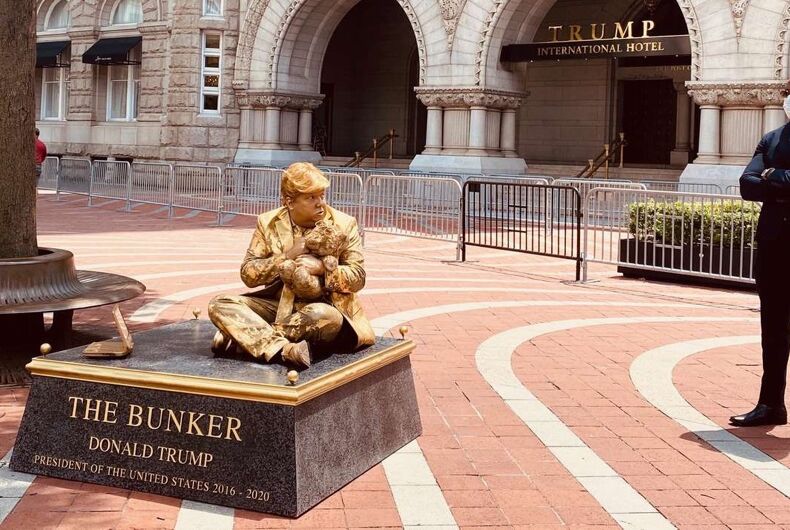 "The Bunker," a "living statue" of Donald Trump was installed in front of Trump's DC hotel.Photo: Trump Statue Initiative

The Trump Statue Initiative is taking the President for his word. Trump has repeatedly expressed support for statues honoring racists, so the collective is installing statues in Washington D.C. to celebrate a man known for being divisive and racist.

Related: Will a Dolly Parton statue replace a Confederate memorial in Tennessee’s capitol?

“The Bunker” features the president sitting on the floor cross-legged and holding a teddy bear.

“The Poser” has Trump standing up and awkwardly holding a Bible while a police officer swings a baton at a Black Lives Matter protestor. A third piece, “Now go back to school” shows him threatening to hit a child with a golf club.

The concept is the brainchild of Academy Award-nominated writer/director Bryan Buckley.

The art installations are obviously temporary and the group worried that they’d be shut down before they could reveal all three.

“Due to the possibility that authorities will object to the brutal honesty of the Trump legacy, we can’t guarantee all three statues will be seen,” they warned before they started.

Organizers have started a petition to city authorities to allow “The Poser” to continue permanently. They encourage artists in other areas to join them in their own hometowns.