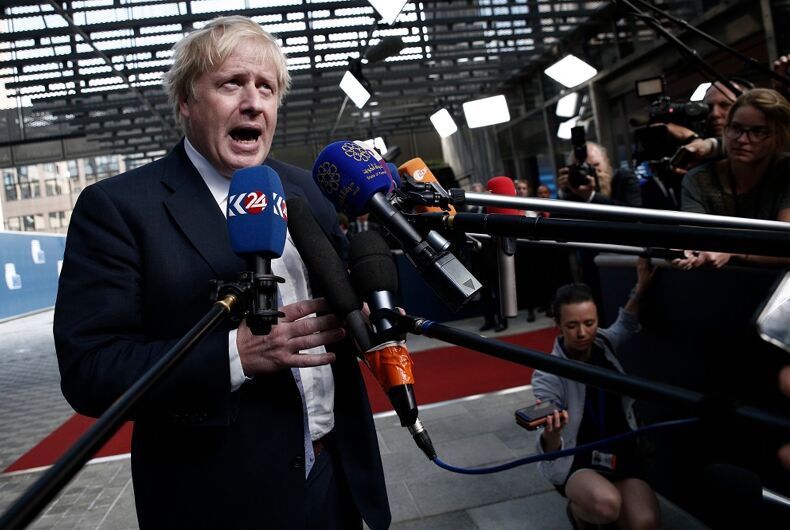 Johnson said that the government will bring forth a bill after a study on the subject has been completed.

“What we are going to do is a study right now on, you know, where is this actually happening, how prevalent is it, and we will then bring forward plans to ban it.”

“We’re delighted that Boris Johnson has listened to our calls for a ban on conversion therapy,” said the Ban Conversion Therapy campaign in a statement. “Now we await action – LGBTQ+ people have been tortured for long enough.”

The transgender U.K. organization Gendered Intelligence noticed that Johnson said “gay conversion therapy,” which means he might have been referring to a bill that would ban conversion therapy for sexual orientation but not gender identity, or he may have mis-spoken.

Conversion therapy attempts to change a person’s sexual orientation or gender identity in order to make them straight or cisgender, and it has been denounced by major medical associations – including the American Medical Association and the British Psychological Society – because it is linked to depression, anxiety, and suicidal thoughts.

The bill would take away a therapist’s license for five years if caught practicing conversion therapy, and it carries steep penalties including fines and jail time for repeat offenders.

Knesset member Nitzan Horowitz of the left-wing Meretz party introduced the bill and called the vote a “historic moment.”

The religious conservative United Torah Judaism Party denounced the proposed ban, saying it would harm “the holiness of the family.” The party – which represents seven of the Knesset’s 120 members – was so upset by the bill that it withdrew the centrist Blue and White governing coalition.

The bill still needs to pass two more readings in the Knesset.

Other countries are also working on potential conversion therapy bans, including Canada, France, and Norway.

In May, Albania and Germany joined Malta, Taiwan, Brazil, Argentina, and several other countries in banning the practice. Currently, 20 U.S. states have banned conversion therapy.