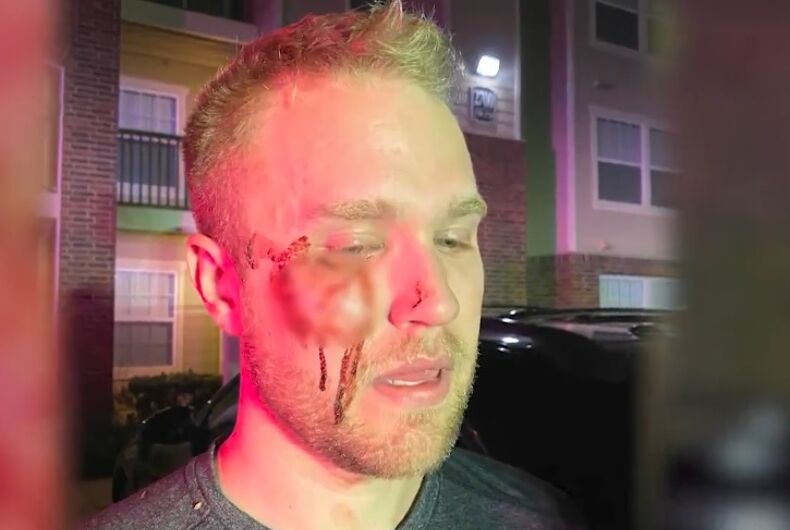 Christian Council, wounded after the attackPhoto: via Oklahoma News 4

A gay man was severely beaten near his home in Oklahoma City by two people who were shouting anti-gay slurs. He was left unconscious and now has difficulty breathing.

Christian Council driving home with a friend in the early morning of Saturday, June 27. He tried to park in his spot, but a truck parked in the middle of the road was blocking his path. He said he honked and the drivers moved the truck.

Related: A gay man was beaten with a shovel & slashed across his eye with a box cutter

He parked in his spot, but the people who moved the truck were waiting for him. First, a woman approached him, then a man and Council said he didn’t recognize them.

“My friend and I got out of my car,” Council told News 4. “They were waiting behind my car, and when they saw us and saw what we looked like. They said, ‘Oh are you two a couple of-‘ and they used a gay slur.”

They started shouting and then they beat him up. Oklahoma Police officer Gary Knight said that the attackers “assaulted him, beat him up, left him laying on the ground.”

When the police arrived, everyone was still there, and Council was lying on the ground.

“I’ll never forget the feeling of my neck snapping back and forth every time he would hit either side of my head,” Council said. He said he was left bleeding and bruised, his head and body swelling, and a gash under his right eye. He’s still having trouble breathing, over a week after the attack.

And he thinks that it was a homophobic attack.

“It was clear that when they could tell my friend and I were gay or that we appeared to be gay,” he said. “They knew they could do what they did to me.”

Police arrested two suspects in connection to the attack: Amery Dickerson and Bennett Stone. They are facing possible misdemeanor assault and battery charges but are not being held in jail.

Oklahoma’s hate crimes law does not include sexual orientation or gender identity.

A GoFundMe has been set up to help Council with his medical expenses and lost wages. It has raised over $13,000 of its $15,000 goal. The page says that he is planning to sue the alleged assailants.