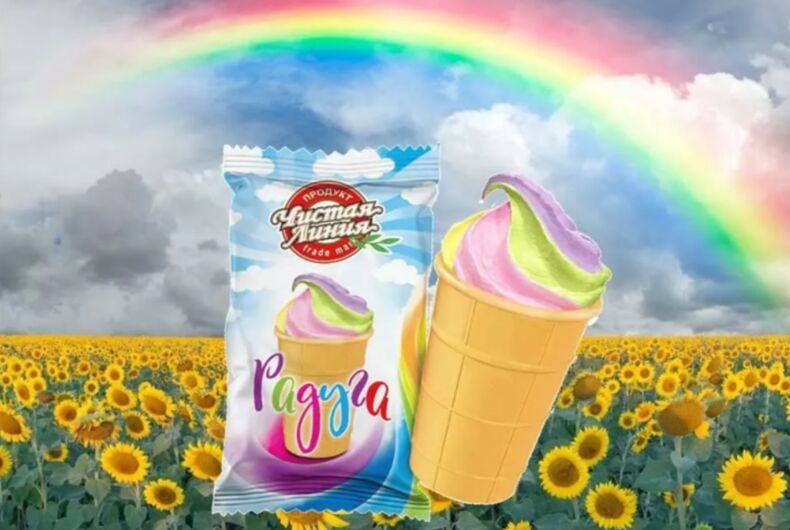 In a video conference with Putin, the leader of Russia’s Union of Women Yekaterina Lakhova complained about a brand of rainbow ice cream produced by Chistaya Liniya.

Related: This ridiculously offensive political ad even includes an old woman spitting at a gay couple

“Even indirectly, such things make our children accustomed to that flag.”

While homosexuality is legal in Russia, the country banned “propaganda” for “non-traditional sexual relationships,” a law that has been used to quash Pride events, LGBTQ activists, and even LGBTQ teens speaking on social media.

At the conference, Putin said, “If there are reasons to believe that something is propaganda for values that are not traditional to us, then… it must be managed by society, but not aggressively.”

Armen Beniaminov, vice president of Chistaya Liniya, took issue with Lakhova’s accusation that his company’s ice cream is pro-LGBTQ, saying that he voted against marriage equality and his company “advocates traditional family relations.”

“We believe that the rainbow is sunlight after the rain, not the LGBT flag,” he told RIA Novosti.

It might seem strange that people are worried that ice cream could turn children gay – especially since it doesn’t even have the correct rainbow flag colors – but anti-LGBTQ attitudes have been ramped up in the campaign for the amendments in Russia.

A TV ad released by an organization in favor of the amendments showed a gay couple adopting a child, and the child looked sad while a woman who worked at the adoption agency spit at the couple.

Last week, Putin called out the U.S. Embassy in Moscow for flying the rainbow flag, saying that it “revealed something about the people who work there.”

The conservative Christian organization Sorok Sorokov filmed people wiping their feet and stomping on a rainbow flag outside the U.S. Embassy.