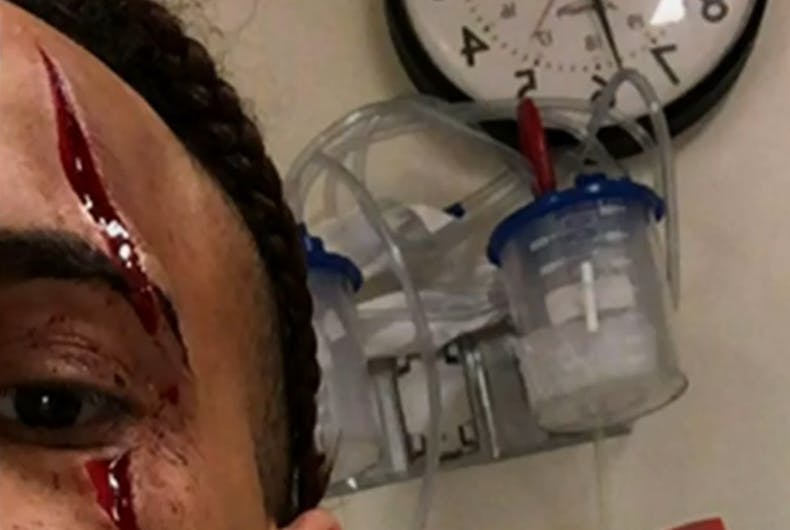 A gay man in Boston was brutally beaten with a shovel and cut with a box cutter in an alleged hate crime, and now he will have to be reminded of the attack for the rest of his life every time he sees the scars on his face in the mirror.

The 25-year-old alleged victim has only been identified in the media by his first name, Victor. He said that he has been harassed by Eddie Smith, 58, several times before. But yesterday, Victor responded that he’s proud to be gay.

“Whenever he sees me he starts disrespecting me. Calling me the ‘F’ word,” Victor told WHDH Boston, referring to the slur. “The only difference yesterday was that I said, ‘Yeah, I’m proud.’”

That set Smith off, according to Victor. Smith hit Victor on the head with a shovel.

The two punched each other and Victor managed to get ahold of the shovel. That’s when Smith pulled out a box cutter and cut Victor’s face.

“I don’t think that he expected me to fight him back,” he said. “When he realized that I was fighting him back, that’s when he stopped real quick, went in his pocket and whipped it out, the box cutter.”

Smith slashed Victor across his eye, from his forehead to his cheek.

After Smith fled, Victor was taken to the hospital, where he was treated for his injuries and received 35 stitches – 20 above his eye and 15 below. Witnesses told police that he was “bleeding profusely” from his head.

“It triggers him whenever he sees me because I live my life openly and he can’t do the same for whatever reason,” Victor said. “That like drives him nuts.”

“I believe he’s a homophobe, because whenever he sees me, he starts calling me the F word,” Victor told WCVB 5.

Boston police were able to catch up with Smith by following tracks in the snow and help from dogs. He was arrested and he’s facing charges for assault and battery with a dangerous weapon, mayhem, and a hate crime.

Smith has already been released on personal recognizance, but the judge ordered him to have no contact with Victor.

“I just hope I don’t see him,” Victor said. “It just sucks that now I have to remember him when I look at my face for the rest of my life.”

58 year old Eddie Smith facing hate crime charges after he hit a gay man with a snow shovel and slashed him with a box cutter outside Boston Police HQ. The victim says “It triggers him whenever he sees me because I live my life openly”. @7News pic.twitter.com/cBrX58NeXw

Kamala Harris should be the Democratic Vice Presidential candidate