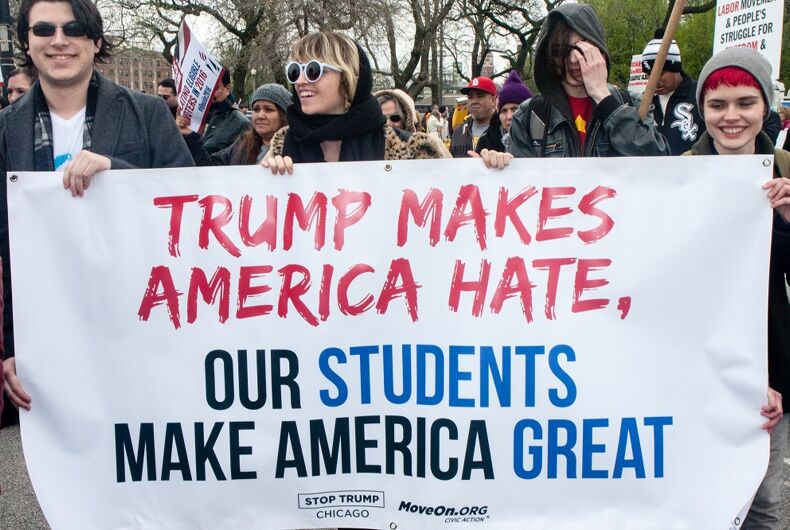 The Trump regime, under U.S. Immigration and Customs Enforcement (ICE), through the Student & Exchange Visitor Program of the U.S. Department of Homeland Security, announced new draconian measures ordering all international college and university students currently enrolled on campuses throughout the country to leave the United States if their institutions have planned to cancel in-person classes in the fall in favor or on-line instruction due to public health considerations during Covid-19 surges in the country.

“Active students currently in the United States enrolled in such programs must depart the country or take other measures, such as transferring to a school with in-person instruction to remain in lawful status,” the agency announced July 6, 2020, writing that the policy applies to F-1 and M-1 visa holders. “If not, they may face immigration consequences including, but not limited to, the initiation of removal proceedings.”

Related: Somehow, Trump nominated an out lesbian judge to the federal bench & Republicans liked her

Possible waivers to the ICE mandates may be issued if a significant percentage of classes are held as “hybrid” – combining on-line with in-person formats – or if they transfer to a school with in-person classes.

Forced to return to their home countries could make it difficult if not impossible to take on-line courses initiated in the United States. First, it interferes with synchronicity when courses are conducted live on-line for international students in parts of the world within time zones greatly ahead or behind their universities.

Secondly, many parts of the world do not have adequate internet connectivity to enable students to participate in on-line courses.

In addition, in more authoritarian countries that censor access to the internet poses insurmountable obstacles for international students.

The new order contradicts one issued in March of this year by this regime affirming that international students could retain their educational immigration status when they are enrolled full-time in their respective institutions and they make sufficient academic progress in their programs of study.

Secretary of Education, Betsy DeVos, added her imprint by issuing an emergency rule banning institutions of higher education from giving virus relief funds to international and undocumented students, including tens of thousands protected under the Deferred Action for Childhood Arrivals program, or DACA.

As typical as it has been in the Trump administration, Betsy DeVos came to her position with virtually no experience and knowledge of public education policy, pedagogy, and practices.

During and since her congressional confirmation hearings, DeVos has proven her utter lack of qualifications and contempt for public education. As a private citizen, she advocated for a voucher system that would divert funding from public schools to private and parochial schools and give greater emphasis on for-profit charter schools. Recently, she was charged with plagiarism.

During her interview with Lesley Stahl on a March 2018 CBS 60 Minutes segment, when asked about her thoughts about school funding, she responded: “We should be funding and investing in students, not in school buildings, not in institutions, not in systems.”

Public schools continue to eliminate after-school programs and arts and humanities educational programs due raising costs and reduced funding. Teachers on average commit hundreds of dollars each year out of their own pockets to help provide students with basic school supplies.

Donald Trump is not very sharp on the educational front as well. His family’s wealth and privilege afforded him the ability to attend the prestigious Wharton School of Business at the University of Pennsylvania.

Though he incessantly boasts of his gigantic intellect, superior grades, and that he is “a very stable genius,” he placed an embargo against his former alma mater never to disclose his transcripts.

In her scathing criticism of the president, niece Mary Trump in her new book, Too Much and Never Enough: How My Family created the World’s Most Dangerous Man, discloses how Donald cheated all through his life in business and other areas.

She even claimed that her uncle paid someone to take the SAT test for him to help him get into the University of Pennsylvania. Trump was “worried that his grade point average, which put him far from the top of his class, would scuttle his efforts to get accepted.”

She writes that he enlisted “a smart kid with a reputation for being a good test taker, to take his SATs for him,” adding that the test-taker was compensated for the effort.

NBC News reports that international students comprise up to 5.5% or approximately 1.1 million students. Many schools rely on fees payed by these students who usually pay full tuition.

But what threat to our national security do these students pose? What imperative does the Trump regime follow to get rid of students who have chosen to come to the United States to attain a quality education from some of the leading world institutions in their respective fields?

These policies simply are punitive. They continue a pattern of racist anti-immigrant so-called “America first” (read “white nationalist”) policies dictated by the Trump regime, which include restricting overall immigration, severely limiting the number of green cards temporarily admitting international workers, and raising the bar so high for asylum seekers hoping for sanctuary that they can rarely if ever surmount.

We are seeing many people suffering under the Trump regime. People who are fleeing their countries in fear of being raped, murdered, enslaved, enlisted against their will as drug runners or sex workers when they are trying to improve their lives and the lives of their children, many of whom are attempting to go through legal channels seeking refugee status.

ICE has locked up many and has taken away their children. They have deported large numbers of parents while their children have become lost in the system deep within the U.S.

Throughout his run for the White House, he threatened to restrict access of all Muslims into the United States.

Trump has dedicated his entire life in erecting walls to divide and conquer, to win for himself at any cost to his now non-existent sense of dignity, integrity, and empathy.

He has assembled a self-imposed blockade to keep out information, facts, and truth.  The only things permeating his self-described “artistically-designed steel slats” embedded in reinforced concrete of his border wall are feelings and conclusions he reaches by gut intuition alone.

Since taking office, Trump has placed a figurative diplomatic concrete wall around the United States by weakening our commitment to and engagement with NATO allies and the World Health Organization and by pulling out of our commitment to the Paris Climate Accords, and treaty obligations with Mexico, Canada, and Iran.

Trump and his administration have worked to toss Dreamers over onto the south side of his border protrusion in the Supreme Court by reversing former President Barack Obama’s executive order under the DACA program.

Mary Trump, whose father and Donald’s older brother, Freddy Trump, died after struggling with alcoholism, asserts that she could “no longer remain silent” following the past three years of Trump’s presidency.

As a licensed clinical psychologist, Mary concluded that Donald has shown “a blatant display of sociopathic disregard for human life” over the coronavirus pandemic – as well as incidents throughout his business career.

Mary has determined as well that Donald manifests every symptom of narcissistic personality disorder as listed in the Diagnostic and Statistical Manual.

“This is far beyond garden-variety narcissism,” she wrote. “Donald is not simply weak, his ego is a fragile thing that must be bolstered every moment because he knows deep down that he is nothing of what he claims to be.”

Proudly and forthrightly, many colleges and universities are standing up and speaking out for the best interests of international students in meeting their educational goals and health needs.

For example, in a letter sent to international students and the entire campus community on behalf of the Director of International Student and Scholar Services at my home university at the University of Massachusetts Amherst: “Today’s SEVP [Student Exchange and Visitor Program] guidance, unfortunately, is a continuation of consistently poorly written and unsatisfactorily considered federal public policy on immigration.”

“This will undoubtedly lead to congressional push-back and perhaps litigation as well. Please know that the IPO [International Programs Office] is making every effort to review today’s information and to provide concrete and helpful guidance as you plan for your fall academic semester. I can also confirm that UMass, as an institution, is actively engaged in advocacy on your behalf at a national level.”

The letter continues: “UMass will do absolutely everything in its power to continue to make our Amherst and Mt. Ida campuses a safe place for you to continue your education, and our support of your well-being is resolute.”

In addition, several universities, including Harvard and MIT, have initiated lawsuits to prevent the ICE order from going into effect.

The ultimate attempt by the Trump regime, by imposing the directive, is to pressure colleges and universities to open campuses in the fall to make it appear that this President has succeeded in rolling back the Covid-19 pandemic and he is well on his way to opening up the U.S. economy. The ICE policies use international students as unwitting pawns in this highly politicized action.