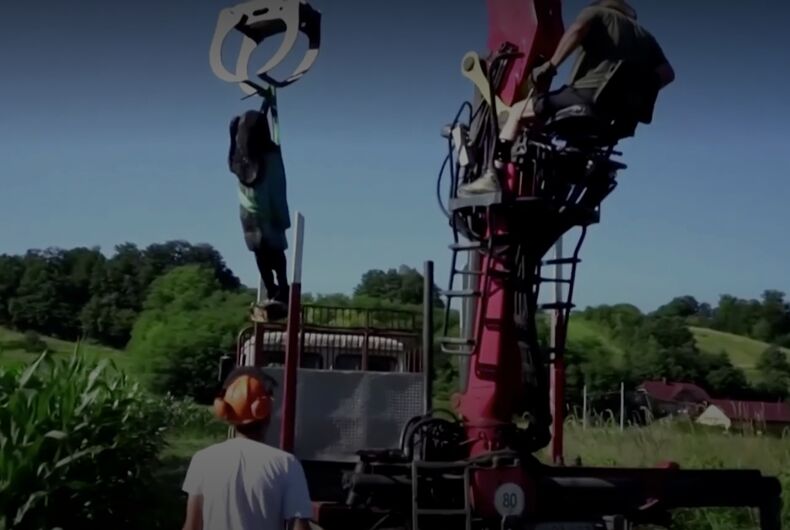 A wooden statue of Melania Trump was torched in Slovenia.Photo: Screenshot

A wooden statue of First Lady Melania Trump was torched on the Fourth of July in her native Slovenia. The statue was carved from a living tree and located in a field on the outskirts of her hometown.

Her husband Donald Trump has repeatedly criticized the removal of statues of slave owners and Confederate military leaders. Racial justice protestors have repeatedly vandalized or torn down statues around the world.

Related: The day the world realized Melania Trump is no better than her husband

The statue of Melania Trump was hewn out of the wood with a chainsaw by a local folk artist near her hometown. The face is not recognizable as the First Lady, but the outfit she wears – a blue wraparound coat with matching shoes – mimics the one she wore to Donald Trump’s inauguration.

The remarkably unflattering statue, that sat atop a large stump, was met with mixed reviews when it was revealed, but one woman summed up the general feeling in the town.

“You know what makes her resemble Melania?” she asked a reporter. “Look at how high she climbed to the top, just like the real Melania, who rose to the top of America.”

“I don’t know why they did it,” Brad Downey, a Berlin-based American artist who commissioned the piece, told Reuters. Downey has already had the charred statue removed.

Last year, a statue of Donald Trump was similarly destroyed.