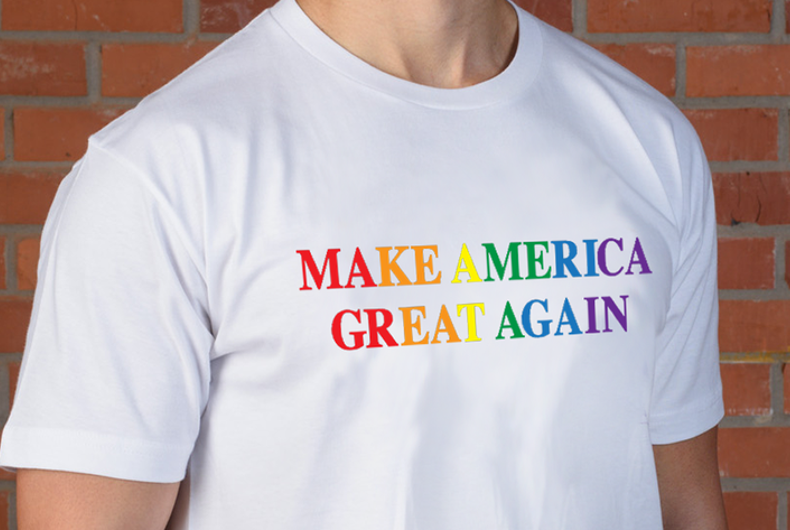 Once again, President Donald Trump did not issue a Pride proclamation to honor LGBTQ citizens, but that hasn’t stopped him from selling an “exclusive Make America Great Again Pride T-Shirt” on his campaign website.

Former Vice President Joe Biden, the presumptive Democratic nominee, issued a thoughtful statement reflecting on the progress the community has made and promising to repeal Trump’s numerous anti-LGBTQ policies.

Trump’s rainbow lettered campaign shirts have been available for months.

It’s hard to understand, considering Trump’s constant attacks on LGBTQ equality, from banning transgender people in the military to expanding religious exemptions for employers, business owners, and even doctors who want to discriminate against LGBTQ people, to consulting anti-LGBTQ hate group leaders on policy, to attempting to change the legal definition of “sex” to erase transgender people.

“Show your support for the LGBT community and the 45th President with this exclusive Make America Great Again Pride T-Shirt,” the website advertises.

Biden, however, didn’t need to advertise support. While Trump neglected the standard Pride proclamation, Biden stepped up to both celebrate with us and decry Trump’s attacks against the community.

“We’ve made remarkable progress towards LGBTQ+ rights in the decades since, from Harvey Milk’s historic election to the first openly gay major presidential candidate,” Biden said in his statement. “During the Obama-Biden Administration alone, we signed the Matthew Shepard and James Byrd, Jr. Hate Crimes Prevention Act into law; repealed Don’t Ask, Don’t Tell; addressed the epidemic of bullying in schools; established the advancement of LGBTQ+ equality as a foreign policy priority; and the White House beamed bright with the colors of the rainbow to mark the U.S. Supreme Court’s landmark decision recognizing marriage equality.”

“It took hard work. It took acting up, organizing PFLAG moms, developing student activists, and a tireless persistence that HIV/AIDS be destigmatized and treated. Many paid a personal and a professional price just for being who they are — risking their jobs, livelihoods, and physical well-being. Many still do.”

“Despite our progress, much work remains.”

Biden also bluntly chastised the Trump administration for their attacks on LGBTQ people and human rights in general.

“Donald Trump and Mike Pence have systematically used the power of the White House as a literal bully pulpit to undermine LGBTQ+ rights,” he said. “They have given safe harbor to white supremacists and other forms of hate. Predictably, we’ve experienced a rise in hate crimes targeting LGBTQ+ people.”

“The Trump-Pence Administration has abdicated America’s global leadership on human rights and walked away from our values, repeatedly failing to speak out against the abuses of authoritarian regimes.”

“This is wrong,” Biden asserted. “We must send a clear message that hatred and bigotry have no place in America or on the world stage. As President, I will take swift action to reverse these odious policies and advance our progress toward ending discrimination against LGBTQ+ individuals.”

“There are dark and challenging realities ahead that we cannot ignore. Yet, I remain optimistic because I believe in who we are as a nation. I believe in the story of this country and the LGBTQ+ community.”