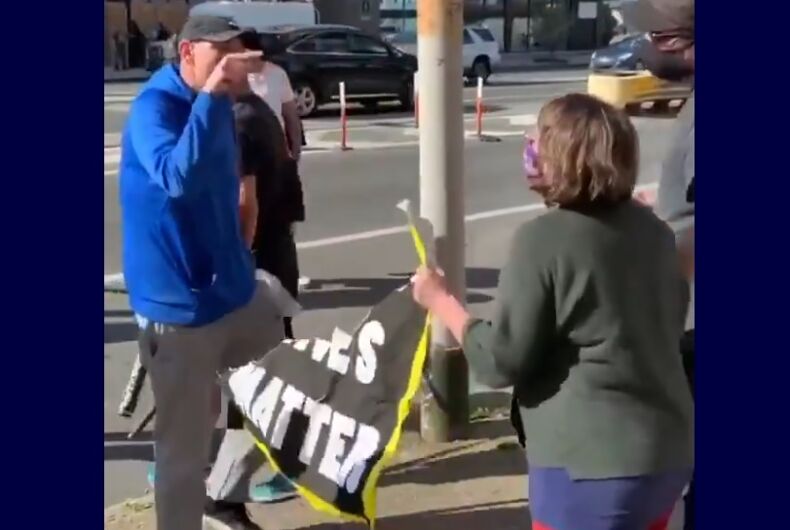 The man shouting about "fa***t energy" at a protestor whose sign was torn.Photo: Screenshot/Twitter

Vigilante groups of white men roamed the streets of Philadelphia last night with baseball bats and other weapons, apparently with police support. On video, one of the vigilantes tore a Black Lives Matter sign while another yelled about “fa***t energy.”

The video, which has been viewed over 400,000 times on Twitter, shows several vigilantes arguing with Black Lives Matters protestors in the Philadelphia neighborhood of Fishtown. One of the vigilantes explained that he needs to protect the police because they “can’t defend themselves.”

“Anyone who wants to throw s**t at a cop, or pick on a cop, pick one of us and we’ll go around the corner and fight you, one on one,” the man shouted.

Another vigilante who is with him grabbed and tore a protestor’s “Black Lives Matter” sign.

Protests have been held all over the country since late last week when a video of an unarmed Black being strangled by a police officer until he died went viral. Minneapolis police officer Derek Chauvin kneeled on George Floyd’s neck – even though the latter was already handcuffed – for eight minutes and 46 seconds, including three minutes after he stopped breathing.

Along with people protesting against police brutality and institutionalized racism, Philadelphia has seen an explosion of vigilante groups roaming neighborhoods with makeshift weapons. The vigilante groups are mostly white men.

There are now two all white armed vigilante groups roaming Fishtown with the blessing of the @phillypolice pic.twitter.com/csGWCDZ6Nw

My hood’s a mess right now. Philly protestors on your way into Fishtown: There’s MAGA scum w/ blunt force weaponry waiting for you. Be ready and crew up. pic.twitter.com/iUDaomO85v

Looks like quite the double standard going on in Fishtown.

It seems white vigilantes can walk around armed with baseball bats and who knows what else while protesters are reviled and treated like criminals.

What's different about that crowd? You see it?pic.twitter.com/qWQsawNIMQ

WHYY radio producer Jon Ehrens said that he was attacked by one of the vigilante groups, who he said were using the n-word.

“I’m ready to f**k s**t up. You know I’ve been looking for a fight for the past six months,” Ehrens said he heard from the vigilantes.

huge congregation of agitated white people with bats, golf clubs and billy clubs. n-words flying. overheard: “I’m ready to fuck shit up. you know ive been looking for a fight for the past 6 months.” pic.twitter.com/UHOTWMSWDT

Ehrens said he was attacked while filming an encounter and posted a picture of his bloodied face.

I got called out for recording them and they beat the shit out of me and pushed my girlfriend pic.twitter.com/JMeR4SJ7y9

He posted a picture later after medical treatment at a hospital, saying that he’s “OK.”