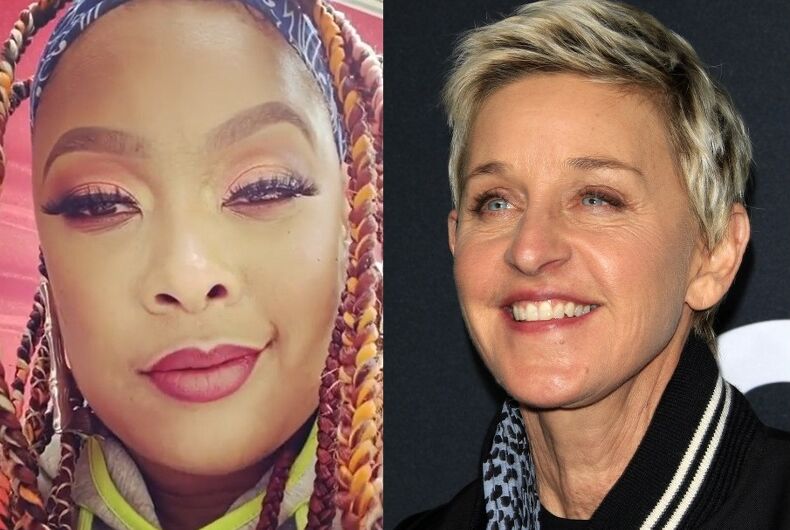 Earlier this year, rapper Da Brat came out in a video posted to Instagram and introduced her fans to her girlfriend.

Now the 46-year-old musician says that she delayed her coming out for decades because of how Ellen DeGeneres was treated when she publicly came out in 1997.

Related: Ellen opens up on how Hollywood ‘bullied’ her when she came out

Da Brat is a Grammy-nominated musician who is perhaps best known for her collaborations in the mid-1990s and early 2000s with Missy Elliott, Mariah Carey, Jermaine Dupree, and Destiny’s Child, among others.

After years of speculation about her sexuality, in March she posted a video of herself getting a gift from her girlfriend, Kaleidoscope Hair Products CEO Jesseca Dupart, effectively coming out.

She told Variety that it wasn’t planned – she just wanted to share the video with the world.

“Jesseca was showing me some pictures and we were going back and forth, joking ‘I’ll post it,’ ‘No, I’ll post it.’ So when she did, I was like, ‘Oh s**t! I just came out after 20-something years!’ But it feels good to share with the world when you’re happy,” Da Brat said.

She explained that the advice she was given in the music industry was to keep her sexuality private.

“I was always told you want to be f**kable to men and women to sell records — you don’t want anybody to discriminate,” she said.

She stressed that it was “absolutely my decision” to keep her sexual orientation private, but that it was affected by what she saw in the media, including Ellen coming out in 1997, being the target of rampant homophobia in the press, losing her sitcom, and becoming a pariah in Hollywood.

“I mean, you saw what happened to people like Ellen. Remember when she lost her TV show, and all these horrible things were happening? People were totally against it,” Da Brat explained.

Da Brat said that her family is religious – she had to go to church five days a week growing up in Chicago – and they haven’t exactly been accepting of her.

“Yeah, my mom is not, like, jumping for joy,” she said. “She’s not going to condone it, but she loves me unconditionally. No one in my family has said anything bad or degrading.”

She said that she worried about disappointing her family, growing up. She preferred dressing butch, but she was made to wear long skirts by her traditional family, something she went along with because she didn’t want her family to be judged by others.

“I would not want anyone in the church to judge [my grandmother] because of what I do,” Da Brat said. “You never want to hurt the people that raised you; you don’t want to disappoint them.”

Da Brat said that she identifies as bisexual now and has been overwhelmed by support from fans.

“It feels like a weight has been lifted,” she said.