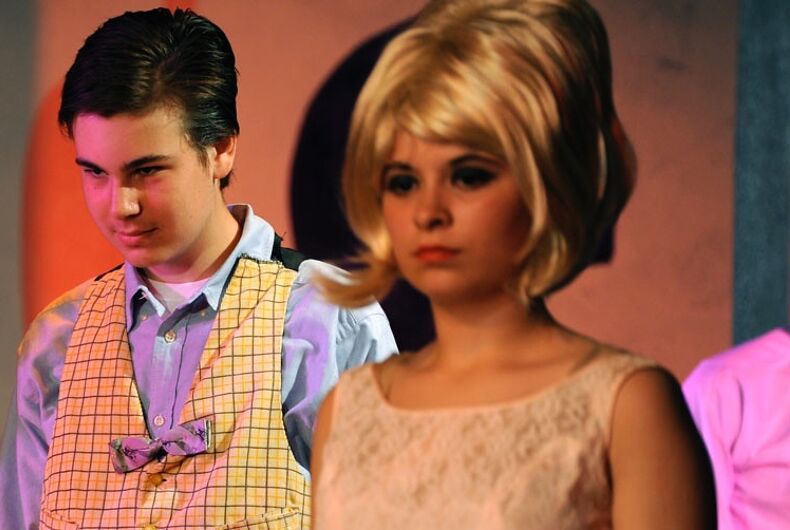 Fallout from the death of George Floyd has ramifications for America’s entertainment industry, and two theater veterans are leading the call for change.

Marc Shaiman and Scott Wittman, the openly-gay creators behind the theatrical version of Hairspray, said this week that future productions can’t have all-white casts because that’s contrary to the show’s anti-racist message.

Their announcement came after a writer for the OnStage Blog, Chris Peterson, urged them to stop allowing non-black actors to play black characters in the show, at a time when the nation is wrestling with the May 25th death while in police custody of Minneapolis resident George Floyd.

“Given what’s happened lately, I hope they do,” Peterson wrote. “I have a feeling that when schools and local theaters resume operations, Hairspray will be at the top of many of their lists.”

Set in 1962 Baltimore – before the civil rights protests of the late 1960s — Hairspray is the story of a white teenager who dreams of appearing on a local TV dance show, becomes a sensation and brings racial integration to the show, which didn’t consistently allow white kids and black kids to dance together. Much of the plot revolves around efforts by the teen, Tracy Turnblad, to desegregate the show.

Since it was first produced as a Broadway musical in 2002, adapted from a 1988 film written and directed by John Waters, Hairspray has been performed around the world, with casts of many nationalities. In some cases, key roles intended for black actors and actresses have been played by white actors, or Asians.

But the anti-racism message tends to get lost or muddled when productions don’t cast actors who support the storyline.  In Japan, for example, one production used an all-Asian cast except for one “blasian” (black and Asian) actress playing Motormouth Maybelle, who is supposed to be black. In South Korea, a production put Asian actors in blackface, until there was an uproar about it.

In the United States, some high school productions have gone with all-white casts, saying they didn’t have enough black students to fill the roles or that not enough auditioned, or that they dropped out after they were cast.  A children’s theater group in Dallas not only used all white actors but cast a thin actress to play Tracy Turnblad, who is written to be plump, and made her wear heavy padding.

Waters, who is gay, blasted the miscasting in his 2019 book, Mr. Know-It-All: The Tarnished Wisdom of a Filth Elder.

“The thought of Motormouth Maybelle played by a white girl in a curly blond wig singing, “I know where I’ve been,” is blasphemy,” he said.

Shaiman and Wittman came to a similar conclusion. According to OnStage Blog and Broadway World, they called for the change because they wanted to close a casting loophole that has allowed producers to use non-black actors to play black characters.

“While it always seemed like common sense to us that people would choose to put on Hairspray with the knowledge that they could perform the show as written, we were naïve,” Shaiman said in a statement on Instagram. “But, to state what I would hope to be the obvious, we never encouraged an all-white production. “

In fact, he said, knowing has Hairspray has sometimes been performed by an all-white cast has “gnawed at me” for years.

“This casting conundrum has been an issue that all of the authors of Hairspray have wrestled with for some time. “

In the past, “while imploring theaters and schools to – if necessary – look outside of their own community to properly cast the show, we eventually allowed groups to cast the show as best they could as long as the words and the story were unaltered,” Shaiman said.

From now on, he said, Music Theatre International, the company that represents and licenses Hairspray, will require future producers “to cast the show so as to accurately reflect the characters as we wrote them. A show that specifically addresses one aspect of the black experience during the civil rights battles of the early 1960s deserves to have its characters accurately and appropriately portrayed on stage.”

Following the 1988 movie, Hairspray became a 2002 Broadway production with music and lyrics by Shaiman and Wittman, who were both professional and personal partners for more than two decades. In 2003, they gained attention for kissing onstage while accepting a Tony Award for Hairspray.  At the time, it was one of the most high-profile demonstrations of gay love and partnership ever shown on live TV.

The Broadway show led to touring productions and then was followed by another movie version in 2007 and a live NBC TV version in 2016. Waters has called it “the gift that keeps on giving” because there have been so many iterations.

One role that hasn’t been miscast over the years is Edna Turnblad, Tracy’s mother. Written for a male in drag, it was originally played on Broadway by Harvey Fierstein and on film by Divine and John Travolta.

The running joke is that no one in the show seems to realize or care that Tracy’s parents are actually two men. The new requirement that roles in Hairspray must be cast “as written” means that Edna Turnblad will continue to be a male role.

A new version of Hairspray was announced last year as a national touring production, set to start this fall. Because of government-imposed restrictions on large gatherings to prevent the spread of COVID-19, officials say, it is unclear whether the tour can proceed as scheduled.

The announcement by Shaiman and Wittman has drawn widespread praise, with many online commenters saying it was long overdue.