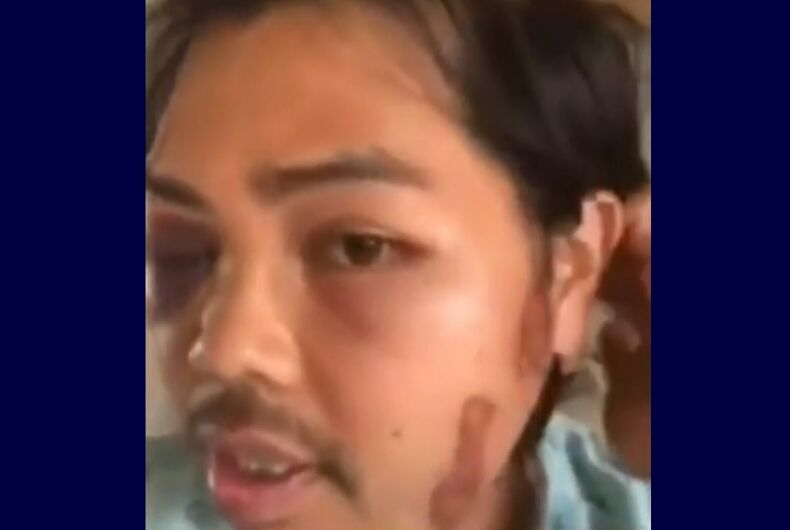 A non-binary activist in California will have to undergo surgery to treat a fractured skull, the result of being shot with rubber bullets by police at a Black Lives Matter protest.

Tee Fansofa attended a protest this past Saturday in Sacramento, when police opened fire at the crowd with rubber bullets and tear gas.

“I was supporting my comrades and friends who were leading, passing out water and snacks, and I was only on the scene for five minutes and then this happened,” Fansofa said in a video posted to GoFundMe.

“I was hit in the face three times, with a tear gas canister and two rubber bullets. I mean, I am very lucky to be alive.”

According to CBS Sacramento, Fansofa suffered from a fractured skull and will have to undergo at least two surgeries.

Lynz Williams, another activist at the protest, recorded some of the shooting on her phone.

“What are your shooting for, what are you shooting!” she said in the recording. “You’re shooting at peaceful protesters, not even looters.”

She said that Fansofa was then hit and went down.

“At that point, I saw about three or four people and grab Tee and just drag a limp body out of eyeshot,” she said.

Williams said that police also shot at “innocent bystanders… standing on the sidewalk thinking that they were safe.”

“Rubber bullets are so strong and so lethal, we have people who were shot in the eye and currently blind,” activist Ayotunde Ikuku told Fox 40. “Tee’s eye was injured but luckily they’re not blind that they have function in both of their eyes.”

Sacramento police said that they have no record of Fansofa being hit.

Mark Merin of the National Lawyers Guild said that the local governments in Sacramento should expect lawsuits for their handling of the protests.

“They seem to be targeting the heads of protesters,” Merin said.

A GoFundMe was set up to help cover Fansofa’s medical expenses because they do not have insurance. The site has raised over $84,000 so far.

According to a 2017 review of studies published in the journal BMJ, 15% of injuries caused by rubber bullets lead to permanent disability. When the injuries are to the eye, 84% lead to blindness. Three percent of rubber bullet injuries are fatal.

“At short range, they come out of the gun as fast as a bullet,” Dr. Rohini Haar told Vox. “And so they can break bones. They can fracture skulls. If they hit the face, they can cause permanent damage and disability.”

“At long distances, they ricochet, they have unpredicted trajectories, they bounce, and they’re quite indiscriminate. So they can’t possibly target either an individual or a safe body part of an individual.”