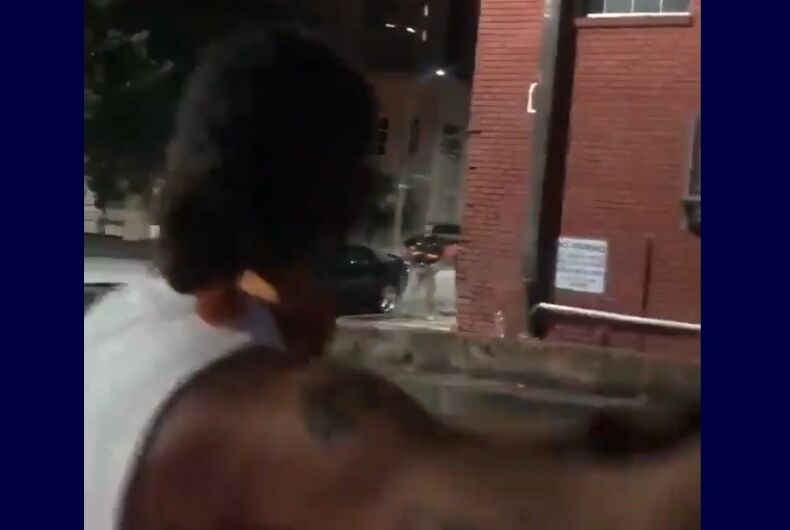 A police officer approaches the owner of the Ruby DeluxePhoto: Screenshot/Twitter

Police opened fire on an LGBTQ bar in North Carolina after they received an anonymous tip that the bar was giving water bottles to protestors.

Tim Lemuel is the owner of the Ruby Deluxe in Raleigh. He said that on Saturday night, his business was vandalized with a white supremacist symbol and the bar’s glass doors and windows were broken.

Related: This man brought a gun to a gay bar & shouted slurs

So on Sunday evening he decided to stay at his business, in part to deter vandals. He also set up a first aid station for people who needed medical attention, washing tear gas and pepper spray out of people’s eyes and handing out water bottles and granola bars.

He said that he and some staff were working there for about seven hours before six police officers arrived and told them to move just after midnight.

“This is my business,” Lemuel responded in video that has since been posted online. “I rent this space.”

The police officers again told him to move. “The game is over. Get out.”

Lemuel walked back toward his bar, and police said, “You’ve been told,” and opened fire.

RALEIGH POLICE JUST FIRED FLASH BANGS AND LESS LETHAL ROUNDS AT MEDICS, INCLUDING THE OWNER OF RUBY’S DELUXE, A QUEER BAR WHERE THE MEDICS WERE STATIONED. pic.twitter.com/sGckVjRC1e

“I was in the Army for eight years, so the bangs didn’t bother me, but my staff were scared out of their minds,” Lemuel later told the News Observer. “If you’ve never been in that situation it appears like you’re going to be killed.”

Lemuel said that deputies had already passed by the bar, which isn’t far from the Wake County Justice Center.

“During the seven hours, they had, you know, every opportunity to come down and check on us, see what was going on or tell us their concerns,” he said.

“They just chose not to. And at some point they just went straight for guns blazing.”

Jen Varani was also helping at the first aid station. She said that it was clear that they weren’t protestors.

The Wake County Sheriff’s Office, though, said that the shooting was justified because it worked and forced the first aid station to disband.

“Once deputies urge the crowd to disperse several times and there is non-compliance, the next step is to disperse the crowd,” a spokesperson said.

The spokesperson said that police showed up at the bar because of an anonymous tip that the bar was handing out water to protestors.

But the Wake County Sheriff’s Office use of force policy says that officers can’t use weapons – neither lethal nor “less-than-lethal” – if people are only putting up passive or verbal resistance. The policy says that less-than-lethal weapons can only be used if someone is “an immediate risk of death or serious physical injury to themselves or others.”

“Had it been anybody, it would have been bad enough,” said Raleigh City Council Member Nicole Stewart. “The idea that it was an individual, a business owner, trying to help other individuals in our community made it that much more startling. And I couldn’t let it sit.”

Stewart sent the video to the city manager and the police chief and is asking for an investigation into the shooting.

“It is a safe space for so many people,” said Council Member and Ruby Deluxe patron Saige Martin. “It is a home to queer folks.”

“We are still dealing with those same issues for those same people today,” he said, referring to the Stonewall uprising. “And hearing those words echo so aggressively as if there was a game to be had? I think (it) speaks perfectly well to the kind of culture and thinking that exists and pervades law enforcement today.”

Editor’s note: A previous version of this article incorrectly stated that the shooting occurred early Tuesday morning. We regret the error.