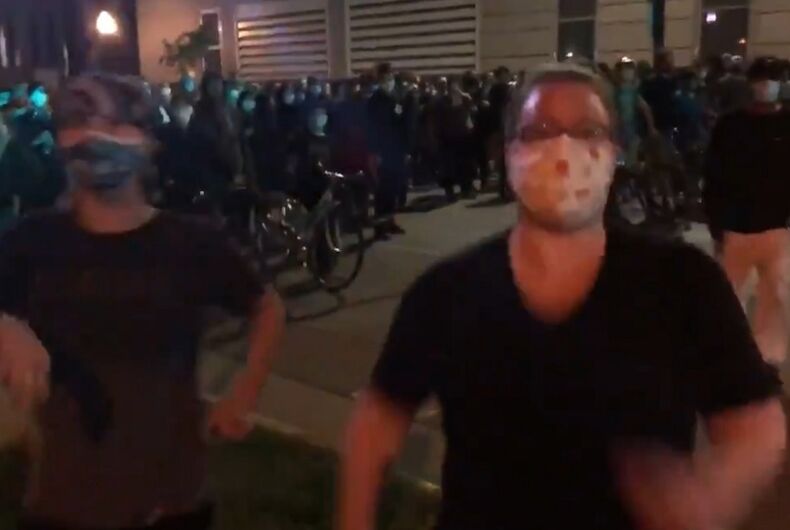 A gay state senator was attacked at a protest against police brutality last night in Wisconsin.

State Sen. Tim Carpenter (D) went to a protest in downtown Madison and said that he was filming and taking pictures of the protestors. That’s when several of the protestors noticed his phone, and two protestors rushed towards him.

He wrote later on Twitter that eight to ten people attacked him at the protests near the state’s Capitol building. He was punched and kicked in the head, chest, and neck and left with several injuries, including bruising, blurry vision, soreness, and a possible concussion.

“I don’t know what happened… all I did was stop and take a picture… and the next thing I’m getting five-six punches, getting kicked in the head,” Carpenter told the Milwaukee Journal-Sentinel.

I took this pic- it got me assaulted & beat up. Punched/kicked in the head, neck, ribs. Maybe concussion, socked in left eye is little blurry, sore neck & ribs. 8-10 people attacked me. Innocent people are going to get killed. Capitol locked- stuck in office.Stop violence nowPlz! pic.twitter.com/Zw2hdfYG66

.@TimCarpenterMKE was just punched in the face by Madison protesters because he was filming. Several people attacked him. pic.twitter.com/jyGIfe0Ogq

Protests all over the country started several weeks ago after video surfaced of George Floyd, an unarmed black man, was strangled to death by Minneapolis police officer Derek Chauvin. The protests in Wisconsin have largely been peaceful.

But last night, the protestors in Madison were chanting the name of Devonere Johnson, a 28-year-old black man in Madison who was arrested earlier in the day after he entered a restaurant with a megaphone and a baseball bat. Critics of the arrest said that the four officers who arrested him were needlessly violent – Johnson ended up with bruises on his arms and legs, according to TMZ – and that he was simply exercising his free speech rights.

The protestors in Madison last night also took down two statues. One was a statue of Col. Hans Christian Heg, a Norwegian American politician who was perhaps best known for his opposition to slavery. He was a member of the Free Soil Party – an anti-slavery party – and joined the Wide Awakes, a militia that fought against slave catchers.

He later led the 15th Wisconsin Volunteer Regimen in the Civil War for the Union, dying from wounds he got in battle.

The other statue was a replica of the statue “Wisconsin” (also referred to as “Forward”), which looks like a woman holding a globe with an eagle on it and wearing a helmet with a badger, the state animal. The original statue was not damaged.

“This is absolutely despicable,” tweeted Assembly Speaker Robin Vos (R). “I am saddened at the cowardice of Madison officials to deal with these thugs.”

Carpenter told the Washington Post that he is a “Gay Progressive Dem Senator” and that he’s “on their side for peaceful demonstrations.” He is one of four LGBTQ members of the Wisconsin state legislature.