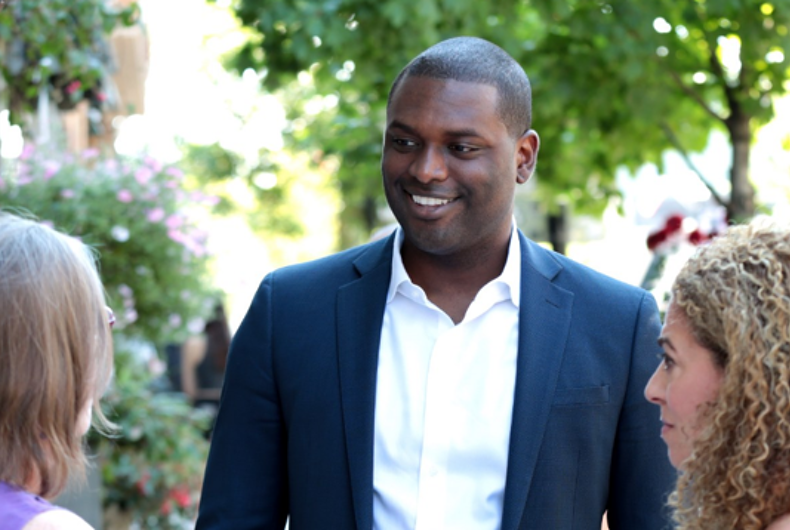 Mondaire Jones is the frontrunner in the Democratic primary for New York’s 17th Congressional District, getting twice as many votes as any of the other six candidates. He could be the first gay, Black member of Congress.

“I was never running to be one of 435 people in the House of Representatives,” he told the Journal News. “I’m running to be a transformational figure in American politics.”

Related: Meet the filmmaker who brought gay black men to television & earned the wrath of the religious right

The results of the primary aren’t final because mail-in ballots have not yet been counted.

Jones, a lawyer who worked for President Barack Obama’s Justice Department, decided to run in the primary to challenge Rep. Nita Lowey (D) from the left before she announced her retirement after over 30 years in Congress. When she withdrew from the race, several other candidates entered the primary.

New York’s 17th includes parts of the Bronx and several New York City suburbs. It leans left; Hillary Clinton won the district with 53% of the vote to Donald Trump’s 39% in the 2016 presidential race and there are twice as many registered Democrats in the district as registered Republicans.

Jones is running on a progressive platform, and he also understands that seeing Black, gay people in positions of power can help young people accept themselves.

“I spent the majority of my 32 years on this earth struggling with my sexuality, being afraid of being open about that with the public because it would result in isolation and would foreclose opportunities to me,” he said in the LGBTQ Nation interview. “So if I had had somebody to look up to growing up, someone in our politics who was Black and gay and a respectable person such as myself, it would have made my process of coming out much easier.”

“I think about young people, especially young people of color, who are queer in this country who are contemplating things like suicide and whether they can go into a profession like politics. I’m fighting for those people. The representation I would provide I think would be transformational.”

Christian pundits say homosexuality is a bigger sin than slavery, so Black people should get over it

How did we get here? WorldPride celebrates 20 years during Global Pride