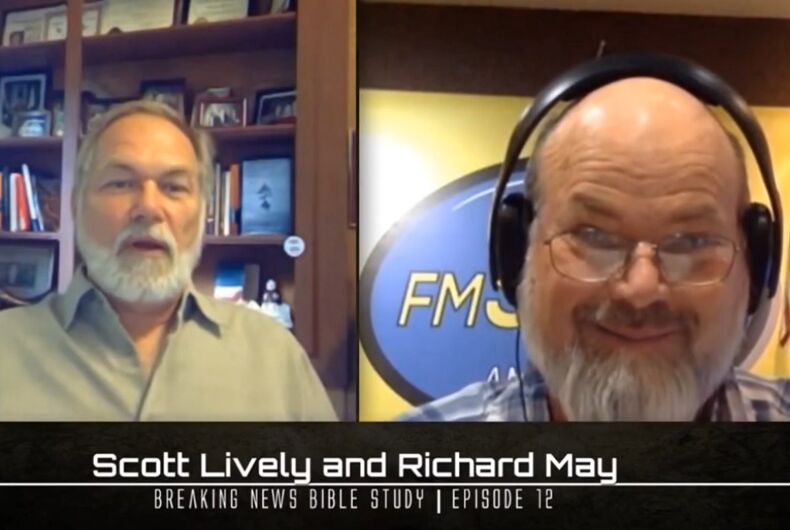 Two white conservative Christians came to the conclusion that Black people should stop “sitting in a chair and crying” over slavery because homosexuality is a “worse” sin.

During the show, May downplayed the horror of slavery in the U.S., calling it “an unfortunate event.” He said the Bible backs that view and compared slavery to “bad kings and wars and famines.”

“It’s not something to lose your mind over.”

Lively said that his father was “severely mentally ill” and ruined his childhood, but that he isn’t “sitting in a chair and crying about what a terrible lot I got in life,” comparing growing up with a bad father to the centuries of enslavement, terrorism, and discrimination Black people faced in the U.S.

“There is a perspective in all of this,” May said. “From a biblical point of view, there are things much worse.”

“Now, I’m going to hit a nerve with this one: which is worse, slavery or homosexuality?” May asked with a smirk.

“By far,” May said. “We need to herald that. I mean, come on, guys. Our priorities are all mixed up.”

He famously co-wrote a book entitled The Pink Swastika, where he argued that gay people are “the true inventors of Nazism and the guiding force behind many Nazi atrocities,” despite being targeted by Nazism

Mondaire Jones is gay, Black & progressive. He’s also likely to be a Congressman next year.