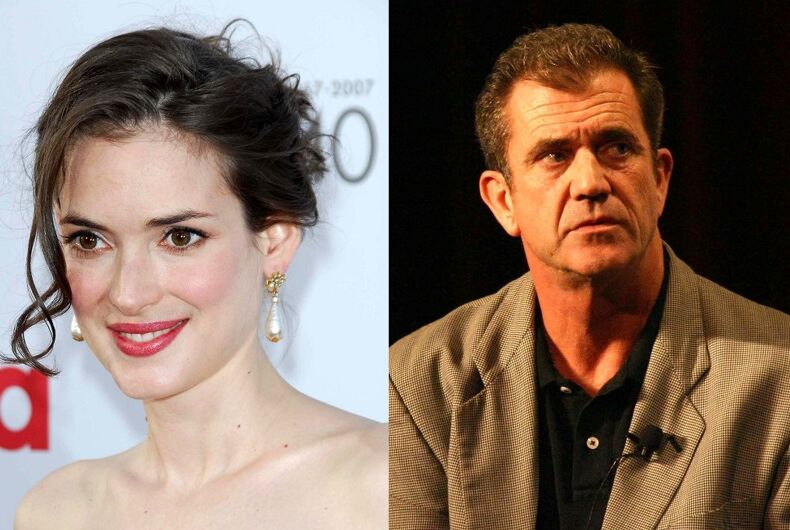 Actress Winona Ryder accused Mel Gibson of making antisemitic and anti-gay statements – including calling her an “oven-dodger” and making an AIDS joke about gay man. Now the production team behind the film Chicken Little will reportedly not ask him to act in the sequel, even though he was in the original film.

Earlier this week, the Sunday Times asked Ryder, whose father is Jewish, if she has experienced antisemitism in the film industry. That’s when she brought up Gibson.

“We were at a crowded party with one of my good friends,” she said. “And Mel Gibson was smoking a cigar, and we’re all talking and he said to my friend, who’s gay, ‘Oh wait, am I gonna get AIDS?’ And then something came up about Jews, and he said, ‘You’re not an oven dodger, are you?’”

“Oven dodger” is a reference to the Holocaust, and Ryder has said in past interviews that some members of her family were killed in the Holocaust.

She said he later reached out to her to apologize.

While her accusations are making headlines this week, she told the same story in an interview with GQ in 2010.

“No one believed me!” she said at the time. Even if people believed her in 2010, her accusations didn’t get much attention.

Gibson denies everything. A statement from a representative called Ryder’s story “lies.”

“She lied about him trying to apologize to her back then,” the response reads. ‘“He did reach out to her, many years ago, to confront her about her lies and she refused to address it with him.”

But Ryder is sticking with her story, saying in another statement that the party happened in 1996, her gay friend was make-up artist Kevyn Aucoin, and that Gibson’s words were “a painful and vivid memory for me.”

“I believe in redemption and forgiveness and hope that Mr. Gibson has found a healthy way to deal with his demons, but I am not one of them,” the iconic actress said in the statement.

An unnamed source told the Hollywood gossip site The Wrap that Gibson is no longer being considered for the Chicken Little sequel. The film is being distributed by Netflix and will go into production this year. Gibson played the character “Rocky” in the original 2000 film.

This isn’t the first time Gibson has been accused of making anti-gay or antisemitic statements. In 1991, he told the Spanish magazine El País that gay men “take it up the ass.”

The publication said that he then pointed to his butt and said, “This is only for taking a shit.”

He was then asked if he’s worried that people will think he’s gay because he’s an actor, he said “Do I sound like a homosexual? Do I talk like them? Do I move like them?”

In 2006, he was arrested for driving while drunk in Los Angeles, and he launched into a long tirade against the arresting officer.

“Fucking Jews… the Jews are responsible for all the wars in the world. Are you a Jew?” he said during the tirade. He also called a female officer called to the scene “sugar tits.” He later apologized and said his statements were a symptom of “the disease of alcoholism.”

Christian pundits say homosexuality is a bigger sin than slavery, so Black people should get over it