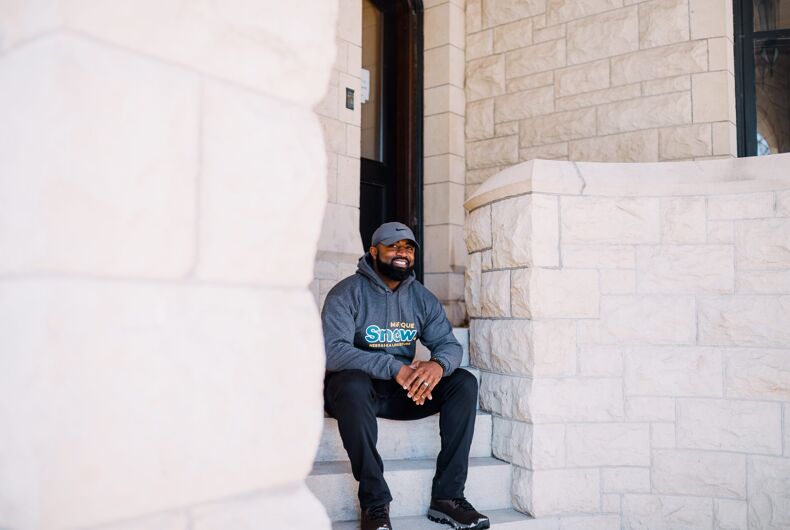 Omaha School Board President Marque Snow could become the first LGBTQ person of color elected to the Nebraska legislature.

Representing and fighting for the LGBTQ community in Lincoln, he told LGBTQ Nation, would be an honor.

On May 12, Snow came in second place in the district’s jungle primary. Now he will face off against the first-place candidate, fellow Democrat and public defense attorney John Cavanaugh in the general election on November 3.

Snow has served on the Omaha Public School Board of Education for the past eight years and has been president for the past two. In holding that role, he said, he realized so much of what he wants to achieve requires legislative action.

“I decided to run to represent the community I already represent, but also a greater community on making sure that all means all,” he said, “and that [I can represent] students who might be LGBTQ+ or students that might not see men of color on a larger scale in a state that traditionally has more white people.”

Snow, running in the Ninth District, spoke of his desire to fight for increased funding for Nebraska public schools with less reliance on property taxes. He also said he hopes to protect teachers’ pensions and ensure an inclusive health and science curriculum across the state.

In Omaha, he said, the school board was recently able to update the sex education curriculum for the first time in thirty years to include LGBTQ terminology, information about contraception, and more to help students better understand their bodies.

“The state of Nebraska hasn’t implemented anything,” Snow said. “We did it for our school district, but if you look at the rest of the state, which is smaller communities, they are still doing the same curriculum…. Whether you live in the city or in a rural community, we need to make sure you’re going to get the same type of education…. We know if we don’t teach that next generation certain subjects, it becomes a health crisis.”

An expanded curriculum is part of Snow’s overall goal to fight for a more inclusive Nebraska.

“Still in our state today,” he said, “my husband could be fired from work because of being gay, and there’s nothing he can do about it. We need to make sure we have protections for same-sex couples and people in our LGBTQ community because why would you live somewhere if you can just be fired?”

A more diverse Nebraska legislature, Snow continued, is crucial to advance this fight in a state that has not outlawed anti-LGBTQ discrimination or conversion therapy.

“In Lincoln there’s no one that looks like us…. People in the LGBTQ community, if they don’t see someone they can relate to and they’re in a community that is always going to be the same group, then they really don’t pay attention to politics, or they say, I can just live in Minneapolis and get protections for who I am.”

Snow moved to Omaha with his husband in 2011. Right now, he serves as Senior Advisor to the Holland Children’s Movement, which fights to ensure children and families are prioritized in Nebraska’s state budget and policy choices. He also works as a mentor with 100 Black Men of Omaha and is on the African Culture Connection Board.

Snow said it was his military parents who taught him the importance of giving back. “I love serving my community,” he said. “It says something when you have someone that doesn’t have kids but wants to have a family and is serving on a school board and is board president, an unpaid position.”

Despite loving his state, though, Snow also believes it needs big change for people like him to feel safe there.

“Nebraska is a great place to raise a family, but if I’m going to raise my family here, then I want to make sure that the laws and the community start to reflect the values that I have.”

In state that trends conservative, Snow said he knows there will be challenges for him as a gay Black man in the legislature, but he believes he is well prepared to take them on.

“Being able to work already with eight other individuals [on the school board], you have to create that values bridge, and once you create that and start working with individuals, [you] say, let’s focus on legislation, let’s focus on how we save taxpayers money and how we help grow our economy, but also make sure the social issues here are taken care of, because they also have a negative impact on our economy.”

Snow also cited his experience working with a near billion-dollar annual budget, negotiating contracts with teachers, and managing and evaluating the superintendent.

“Being able to do all of that helps you prepare yourself for working across the aisle…. Making sure when you’re going to put legislation down [progressive legislation] you also have to convince conservatives on the other side that it is in their best interest as well, and for the greater good of the state to pass that. I think I can do that. I’ve been tested. I’ve been doing that.”

Above all else, Snow said he hopes voters understand he is just like them.

Before House LaBeija, there was “The Queen”

Looking for a place to retire? There are some obvious choices & some surprising ones.