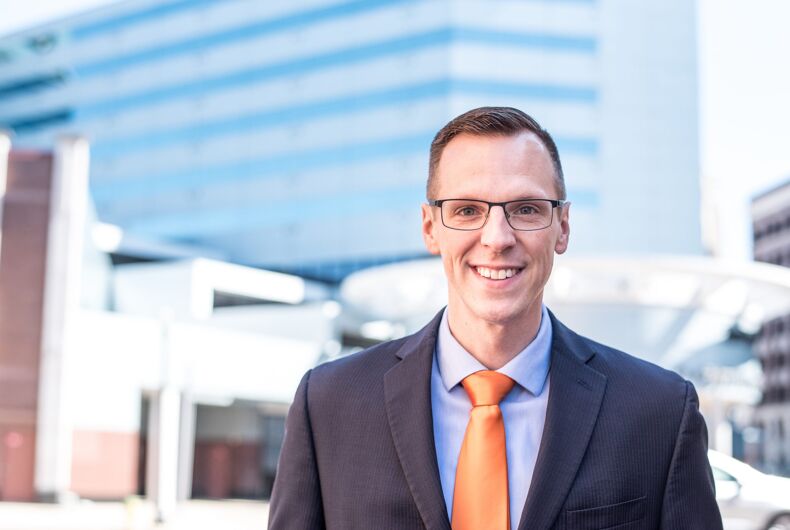 Gay Michigan Rep. Jon Hoadley (D) has served in his state’s legislature for the past five years. Now, he has taken up a new challenge: running for U.S. Congress against anti-LGBTQ incumbent Rep. Fred Upton (R).

If Hoadley wins the race in Michigan’s sixth district, he will be the state’s first out member of Congress.

“That matters in a place like Michigan,” he told LGBTQ Nation, “and in a place like the Sixth Congressional District, which has a lot of farmland. Because it shows that our families and our values win everywhere.”

Advancing LGBTQ equality has always been a priority for Hoadley. He has served as Executive Director of the National Stonewall Democrats and currently serves on the advisory committee to the National LGBTQ Task Force.

As a state representative, he has continued to fight for LGBTQ discrimination protections, speaking out against anti-LGBTQ Republican lawmakers, who control the legislature and continue to stall progress.

“I’ve been proud of the fights that we pick… Even if you don’t always win the fights. Just being there and being a voice so people know their values are represented, that has been incredible.”

In Congress, though, Hoadley hopes to accomplish more.

“The Equality Act has been sitting on [Senate Majority Leader] Mitch McConnell’s desk for a year now,” he said. “Step one, we have got to get that thing done. It is past time that LGBTQ Americans receive full and equal treatment under the law. It’s also for me a reminder that we cannot take any of these issues for granted.”

“The next president will appoint numerous Supreme Court justices that will weigh in on our lives, and let’s not forget that there’s cases in front of the Supreme Court right now that are talking about creating carve outs to allow legal discrimination based on people’s sex or gender identity. So, we cannot rest on our laurels at all right now.”

In Michigan, Hoadley has also established himself as a vocal advocate for the need for better long-term care for aging citizens. As such, he said he imagines he will soon take up more work in the realm of LGBTQ elder care as well.

Hoadley is working to push forward a number of other progressive issues, but accessible and affordable healthcare is close to his heart. His partner Kris has multiple sclerosis, and together the couple has experienced firsthand what Hoadley describes as “the headaches of the healthcare system.”

“Now, we wait every January to see if the medications that he’s on — that are doing a great job for him by the way — are still going to be covered. What happens if he loses his job, as millions of Americans have experienced recently? Even if we keep the great prescription drugs he has, will they remain affordable?”

“People like Fred Upton vote against controlling those prices.”

In the August 4 Democratic Primary, Hoadley will face off against teacher Jen Richardson. On the Republican side, voters will choose between Upton and real estate developer Elena Oelke.

A recent poll from FiveThirtyEight shows Hoadley and Upton neck-and-neck, with Hoadley polling just one percentage point higher than Upton, 38% to 37%.

While the two are close, Donna Victoria of Victoria Research – which conducted the poll – said the numbers are bad news for Upton.

“That is a crushingly low level of support for an incumbent,” Victoria wrote in a memorandum discussing the results, “and the Undecided vote is higher among Republicans, indicating that they are feeling hesitant about their long-held views. Upton also has fairly high unfavorables, with 42% of district voters saying they feel unfavorable towards him.”

“I’m running for Congress because we need to put people and community at the center of our decisions,” Hoadley said. “Government works when you put good people in government, and it should be a place where we come together to do things that are bigger than any one of our selves…. I know that tomorrow can be better than today, but we’ve got to make sure we’re putting people in Congress who are looking out for people.”

At the end of the day, Hoadley emphasized, he wants to be in Congress because he loves to help people.

“I really have loved my job as a state representative,” he says. “It is difficult. It’s hard. It can be exhausting. But when you actually finish and you get to help someone, or you get to make a change to a bill to make it improve people’s lives, that feeling is incredible. So, if I was able to continue to serve in Congress and continue the service I’ve started here as a state representative, it would just be the dream of a lifetime.”