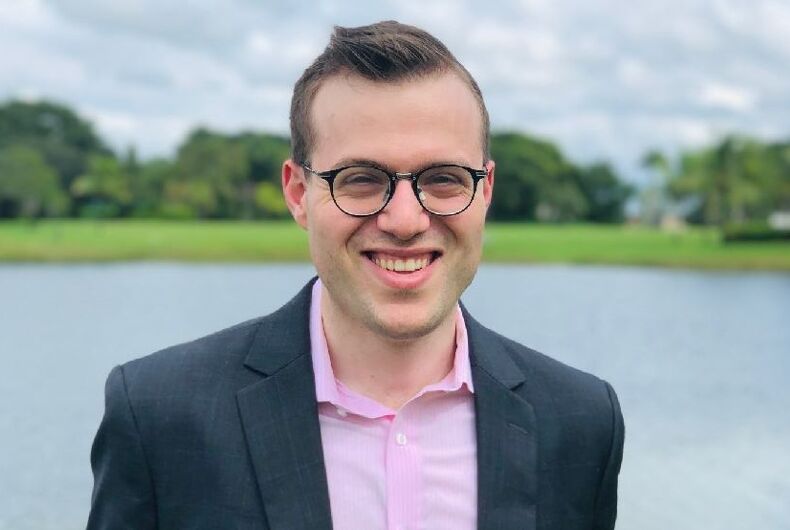 Chad Klitzman is not only running to become Florida’s first out LGBTQ supervisor of elections, but he is also doing so in one of the most notorious voting counties in the nation.

The Broward County Supervisor of Elections office has seen controversy after controversy, including being one of the counties at the center of the historic “hanging chad” fiasco surrounding the election of President George W. Bush.

Related: Trump told a racist story about a pro golfer to Congressional leaders

Klitzman, 26, grew up in Broward County. He hopes he can restore people’s faith in the office.

“I maintain that voting is the most fundamental thing we do,” he told LGBTQ Nation. “Incumbent upon all the other political issues we are about is us feeling confidence when we go vote that our vote counts.”

“Over the last couple of decades,” he continued, “we’ve had a couple of issues that have left some people to believe their vote might not count. Some of that is true, some is hyped by the media, but that is the perception. This is my home, and I couldn’t watch from the sidelines as people continued to feel this way.”

He is also fully aware of the irony of his first name, which is why he kicked off his campaign with the slogan, “Chad won’t leave your vote hanging.”

Klitzman believes being the first out gay supervisor would certainly mean something to Florida’s LGBTQ community.

“I think it would be significant in the sense that the state of Florida still has quite a bit of work to do with respect to various anti-discrimination laws,” he said.

Indeed, Florida has no statewide law protecting LGBTQ people from discrimination. As supervisor, Klitzman says he would have a lot of discretion over how to run the office, and he’d make sure to do so inclusively.

“I aspire to make the office a model for LGBTQ inclusivity, and really diversity and inclusivity across groups,” he said, “but especially the LGBTQ community, given I’m part of the community, and I think it’s a great way to demonstrate to the rest of the state how things should work in an office.”

Klitzman’s main priority, though, is to modernize the Supervisor of Elections office. He began his campaign by driving over 4000 miles across Florida to visit all 67 county offices and learn how they operate.

Based on his findings, he hopes to obtain grant funding to implement biometric security technology that would secure the rooms where ballots are kept, along with the election equipment.

Most importantly to Klitzman, modernizing means showing up for the community. To him, it means participating in community events, getting more involved with local schools, and all in all getting more people excited about voting.

Klitzman has a vast array of professional experience — all of which he feels prepared him well for the supervisor role.

“I maintain that this is a job that requires some legal experience, some logistics experience, and some administration experience,” he said. “As well as some well honed attention to detail. These are things I’ve been able to amass through my diverse set of experiences.”

“I’ve literally been trained in how to manage lines,” he said.

He then attended Columbia Law School, and during his time as a student, worked in the General Counsel’s office at JetBlue Airways and served at the Federal Highway Administration and Federal Aviation Administration. Amidst all of this, he was also succeeding as a screenwriter, taking part in the production of the Netflix film Candy Jar, which he wrote.

Klitzman then went to work at one of the world’s best law firms, Paul, Weiss, Rifkind, Wharton & Garrison LLP. He said his work there in corporate securities taught him to be extremely detail-oriented. “When you’re dealing with multibillion dollar security transactions there is really very little room for error. All I was doing when I was at Paul Weiss was being trained to pay attention to detail,” he said.

He even thinks his experience as a screenwriter is significant, believing his creative side can help play a role in improving the Supervisor of Elections office.

“I think it speaks to the broader point about creativity,” he said. “We need people serving in government who have the capacity to come up with innovative ideas, especially in the world of messaging. I don’t think there’s an area where we need to get people more engaged than in the realm of voting.”

Klitzman has been endorsed by the LGBTQ Victory Fund and former US Secretary of Homeland Security Jeh Johnson, among others. He currently has four opponents in the race: Ruth Carter-Lynch, Mitchell “Mitch” Ceasar, Timothy Lonergan, and Bamon Joevahn Scott.

Above all, Klitzman said he wants voters to know that he hopes to bring “uniformity and process” to the Supervisor of Elections office.

“When I say that, I mean [for] every function of the office, from voter registration to a recount, there is going to be a corresponding process or manual.” When it makes sense, he said he will also make these manuals publicly available so the office can be held accountable.

Throughout the race, he is also holding his gay identity close to his heart. “I think about what my candidacy would have meant to my younger self,” he said. “And that’s one of the reasons I really wanted to run. Because ultimately, I maintain that when we are seen and represented in the public arena, our voices are amplified.”