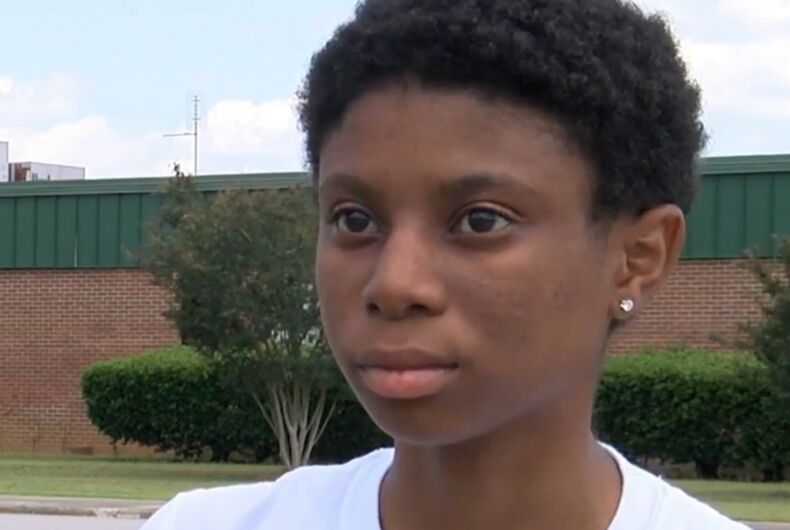 A lesbian high school senior in South Carolina said that she wasn’t allowed to walk at her high school graduation because she broke the dress code by wearing pants.

Related: A trans teen was told her senior photos were ‘inappropriate.’ They weren’t for long.

But when she showed up, she was told that she wouldn’t be allowed to walk at graduation because she was violating the dress code, which requires girls to wear dresses.

“I didn’t think it would be that big of a deal, because we’re already here, we’re already fixing to walk but now I can’t go because of a dress code,” she told ABC 15 News.

Her clothes would have been covered by a robe, and she said that people at the school already know about her sexual orientation and that she dresses butch.

“I didn’t think they would be like, ‘Oh, you can’t walk,’ because they already know me,” she said.

Clark left the ceremony and watched from the other side of a gate. Then she understood that school officials weren’t even going to call her name.

“That was the part that made me more mad than anything because I was there you could have least called my name,” Clark said.

In a statement, Lamar High School said that the policy has been in place for 20 years.

“We welcome students or parents who have concerns with any policy or procedure to meet with administration and discuss those concerns,” the statement said. “In the past, when a student raised concern with the administration about the dress code prior to graduation day, the issue was addressed.”

“It shouldn’t have stopped me from doing something what I have been waiting on for 12 years,” Clark said of her disappointment. “I went to school. Everybody be happy for their graduation day and I couldn’t even experience that.”