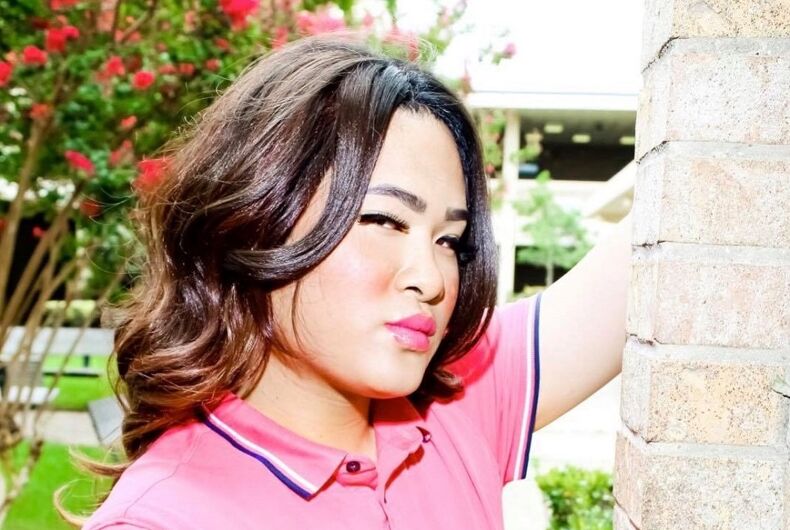 A transgender teen was told by the principal that her senior photos were “inappropriate” and couldn’t be included in the yearbook. But she got him to reverse his decision.

Kami Phan is a senior at Southwood High School in Shreveport, Louisiana. Last summer she went to a photographer for her senior pictures, like her classmates did.

For the pictures, she wore some makeup, a pink polo, and jeans… in other words, she dressed like lots of other teenage girls do.

But months after submitting the pictures to the school, Principal Jeff Roberts found Phan in the hallway at school and told her that he was rejecting her photos. He said they were inappropriate, violated the dress code, and couldn’t be included in the senior yearbook.

What part of the dress code did the pictures violate? Well, Phan was assigned male at birth, and she was dressed in feminine clothes.

“I got highly upset,” she said. “What killed me was when my principal had told me that I should not dress after hours. I don’t dress inappropriately. When he said that, I felt like I was a prostitute. That was very, very rude.”

Southwood’s dress code, though, doesn’t prohibit the clothes she was wearing, and students say that Roberts is usually pretty lax about the dress code. But when he told Phan that she couldn’t wear heels and makeup at the graduation ceremony, the message was clear.

“If I wore that same outfit, there would be no problem, no one would say anything. So why treaty Kami any different just because of what her birth certificate says?” Tatjana Cotton, Phan’s friend, said.

Phan didn’t let the principal stand in her way. She and Cotton started a Change.org petition to draw attention to what happened. She ended up getting almost 5000 signatures, which is a lot, considering the school only has 1400 students.

This past Tuesday, she had a meeting with the principal. Her mother, the student body president, a school counselor, and a local LGBT activist also attended.

After the meeting, Phan posted on Facebook “I won the battle!!”

Recently allegations have been made concerning the rights of transgender students at Southwood High School and schools in our district. While federal and state law prohibits the district commenting on individual student cases, the district’s position is clear: Caddo Parish stands by the First Amendment right of students to express themselves and that belief is supported within the Caddo Parish School Board’s approved dress code policy. This expression is without regard to race, color, religion, age, national origin, sex, sexual orientation, gender identity or disability.

Is Ted Cruz in trouble from a pro-LGBT challenger?