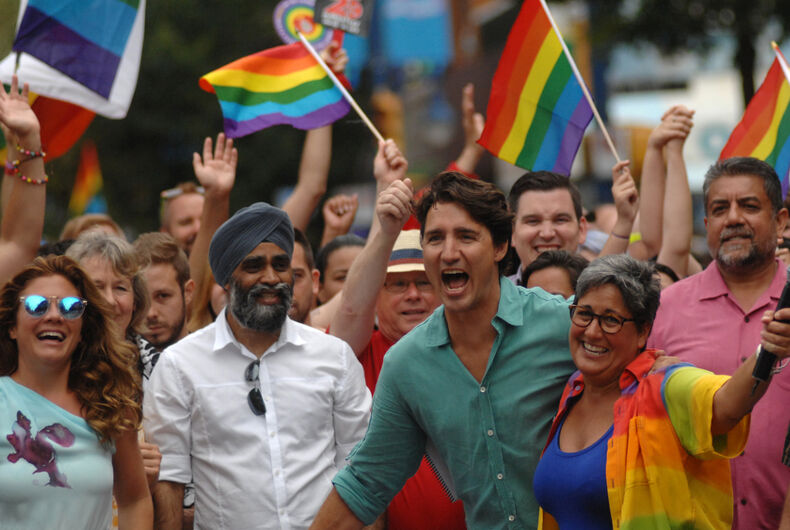 This weekend an estimated 300 million people will join together over 26 hours to participate in Global Pride. This online worldwide Pride event includes contributions from over 500 organizations from 91 countries. Global Pride is a grassroots response to the impacts of the pandemic on the Pride movement and against the racial injustice and police brutality that People of Color and the LGBTQIA+ community face every day. It is led by a volunteer team of over 100 people that have contributed well over 20,000 hours of work to make it possible. It is led by InterPride and the European Pride Organisers Association, along with regional and national Pride Networks.

All this could not occur without the movement building that has happened over the past 20 years since the first WorldPride, held in Rome from July 1st to 8th 2000. An event that pushed back against hundreds of years of discrimination, criminalization, and oppression of the LGBTQIA+ community by the Roman Catholic Church and Christianity, as the Vatican celebrated the Jubilee.

In early 1997, Mario Mieli and Arcigay were awarded the title of EuroPride by EPOA. Renato Sabbadini and other leaders of these organizations reflected about the global impact of the Vatican on the LGBTQIA+ community, and they built the concept of what would become WorldPride in 2000.

I had the opportunity to interview Renato about his experiences in 1997 when he asked the Pride Movement to come together at the first WorldPride in Rome.

“There were already fears that Pride was becoming too commercial. That it was only about celebration, not focused enough on claiming our human rights and dignity. WorldPride presented an opportunity for us to return to our roots,” said Renato Sabbadini, one of the founders of WorldPride. “Global Pride is a concrete manifestation of what can truly happen. It is an embodiment of what WorldPride represents.”

WorldPride in Rome was Italy’s first international LGBTQIA+ event that gathered activists and supporters from over 40 countries. Police estimated that there were 70,000 marchers at the first WorldPride march.

1997 was an important year for the Pride Movement. InterPride was registered as a charitable organization in the USA. For the first time since 1982, the Pride Organizers conference (hosted that year by NYC Pride) went international, welcoming Organizers from Asia, Africa, Central America, the Caribbean, Europe, and Oceania. And WorldPride was born.

“As big as WorldPride was, it also brought us back to our roots,” said David A. Correa, interim Executive Director of NYC Pride. “New York City welcomed the world in 2019 as we honored the 50th anniversary of the Stonewall riots, celebrated the first WorldPride in the United States, and organized the largest LGBTQIA+ celebration in history. Until now.”

“The world has changed so much in one year, and Global Pride is an extraordinary response to the global pandemic, economic turmoil, and historic uprising we are witnessing around racism. Our hope is that those who participate in Global Pride and in their local virtual Prides, especially people that may not usually have access to Pride, experience and understand that they are not only part of an extraordinary LGBTQIA+ community but no matter where they are, they are not alone.”

WorldPride will be hosted next by Copenhagen in 2021, and then by Sydney in 2023. Both of these events will build on previous WorldPride editions, strengthening the human rights components of the event. As the world gathers online for Global Pride, we are reminded that it is vital that we physically come together, at events like WorldPride, to connect, to build relationships, to end isolation, and to improve the lives of LGBTQIA+ people. Online gatherings create significant impact and provide vital access to LGBTQIA+ people around the world, but they cannot replace physical acts of visibility, celebration, and protest.

“WorldPride isn’t just about celebrating. It is a human rights event that highlights current affairs and the challenges of the LGBTQIA+ community. We use it as a stage where we can speak about these things and ensure our voice is heard,” said Lars Henriksen, Political Liaison Officer of Copenhagen 2021.

“What is important about the Stonewall Riots is that they are still relevant today. We are still in a world where 68 countries criminalize homosexuality. It is important that we don’t take the celebration out, but that we ensure space for the human rights discussion.”

“Celebration has been fundamental to our community. In times of adversity, we have celebrated. We celebrate who we are and our culture. We always say that we advocate for our rights through artistic expression. I think that performance and celebration is a way of protest or method of advocacy in itself,” said Kate Wickett, CEO of Sydney WorldPride.

“We do not want to just shine a light on a particular moment. It will be the 5th anniversary of marriage equality in Australia and the 45th of Pride in Sydney. Still, WorldPride Sydney will be more about shining a light on the southern hemisphere and especially the Asia Pacific region. A majority of countries in the Pacific region have laws that discriminate against or criminalize LGBTQIA+ people.”

Sydney will host the first WorldPride in the Southern Hemisphere. The event will feature a nighttime parade and festival. It will include activities that build capacity and connections for marginalized and racialized groups within the broader LGBTQIA+ community.

Join the world, on the 20th anniversary of WorldPride, at Global Pride this weekend, featuring more contributions from the Global South, People of Color, and from marginalized groups than a worldwide Pride ever has before. It will shed light on the fight for equality, protection, and decriminalization of LGBTQIA+ people around the world.

Political leaders, including US Vice-President Joe Biden, Irish Taoiseach (Prime Minister) Leo Varadkar, and Luxembourg’s Prime Minister Xavier Bettel have joined in support of our community. The show will be streamed on Todrick Hall’s YouTube with performances from over 40 top artists around the world, including Laverne Cox, Pussy Riot, Adam Lambert, and Kesha.

They have all joined the cause to Empower Pride Organizations Worldwide, the global mission of InterPride.

Andrew Baker (he/him) is an indigenous language speaker, ceremony carrier, educator, administrator, artist, counselor, and activist from Simcoe County, Ontario, Canada. He currently lives in Geneva, Switzerland. He serves as a Co-President of InterPride and a committee member with Geneva Pride.

Mondaire Jones is gay, Black & progressive. He’s also likely to be a Congressman next year.

Pride in Pictures: Bear-ing with love