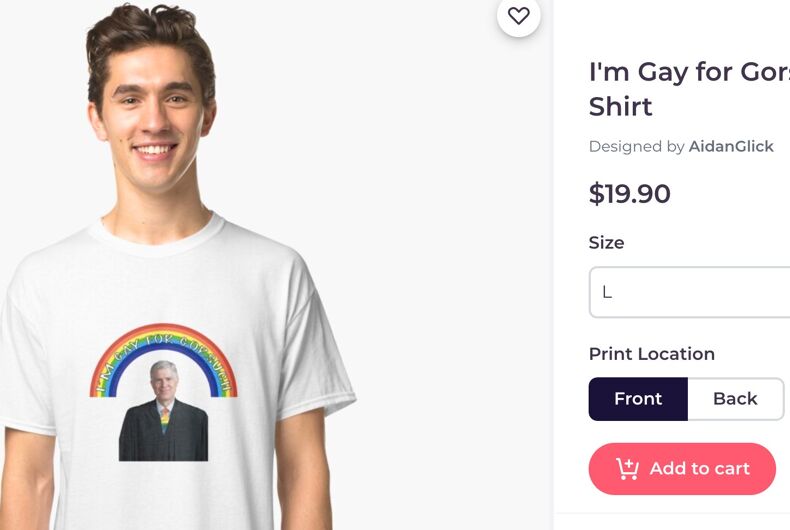 Conservative pundit Brad Polumbo has ordered a new novelty t-shirt and made sure to share his excitement.

“ORDERED,” he tweeted along with a photo of a t-shirt that says “I’m gay for Gorsuch” with a photo of conservative Supreme Court Justice Neil Gorsuch wearing a photoshopped rainbow tie.

Related: Is Neil Gorsuch the new Anthony Kennedy? Don’t count on it.

Twitter being what it is, had thoughts. Needless to say, most were not supportive of the homage to Gorsuch.

Up to now, Gorsuch has been such a reliable vote for the right that Erwin Chemerinsky, the dean of the law school at the University of California at Berkeley, told the Washington Post last year that “he’s everything conservatives hoped for and liberals feared.”

Nothing in Gorsuch’s record that indicates any real sympathy for LGBTQ people. He voted in favor of the Trump administration’s ban on transgender military personnel. He issued a dissent in a case involving same-sex parents wanting to have both their names on their child’s birth certificate, arguing in favor of a “biology based birth registration regime.”

Most concerning of all is Gorsuch’s affinity with religious liberty arguments, the tool that conservatives are using to carve out exceptions to LGBTQ rights. Gorsuch made a bit splash in 2013 when he ruled that the craft store chain Hobby Lobby was entitled to religious freedom of expression.

While responses to the shirt were overwhelmingly negative, one person did respond to gleefully report that their nephew created the shirts.

“Well that’s not a very nice thing to say,” the family member shot back.

“It’s true though,” another quickly pointed out.

Holy fuck this sucks ass so much. God they'll give a fucking checkmark to any moron won't they?

A Colorado state trooper killed a transgender woman. Authorities told the media he shot a man.